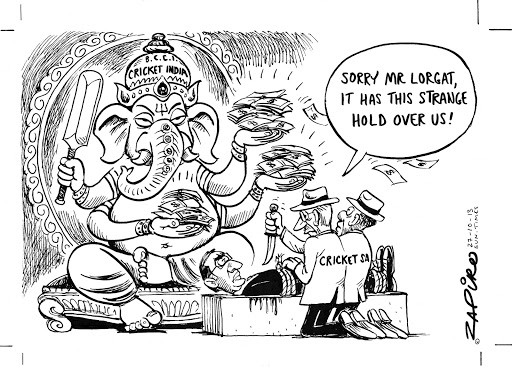 South African Hindu organisations are angry about a cartoon by Jonathan "Zapiro" Shapiro depicting their god of success, Lord Ganesha.

The Star reported that the organisations described the cartoon as a "flagrant disrespect and denigration of our glorious Hindu faith".

The cartoon, carried on Shapiro's website on Sunday and in the Sunday Times, shows Lord Ganesha holding a cricket bat and money, while Cricket SA (CSA) CEO Haroon Lorgat, tied up on an altar, is about to be stabbed as a sacrifice to him by two CSA officials.

The cartoon refers to the CSA agreeing to suspend Lorgat for the duration of India's tour to South Africa after its hand was apparently forced by the Board of Control for Cricket in India.

According to the newspaper, the SA Hindu Dharma Sabha was expected to lay a formal complaint on Monday with the Commission for the Promotion and Protection of the Rights of Cultural, Religious and Linguistic Communities.

Dharma Sabha president Ram Maharaj told The Star he had been inundated with calls from angry Hindus. Maharaj reportedly said they wanted Zapiro to do what was right, and were willing to accept an apology.

The newspaper reported that SA Hindu Maha Sabha president Ashwin Trikamjee had said the cartoon showed a lack of respect for religious beliefs.