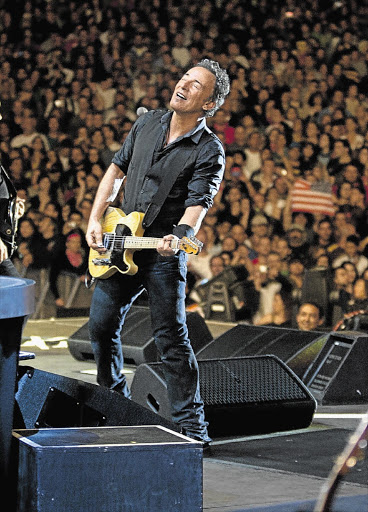 Bruce Springsteen and the E-Street Band will play four shows in South Africa in 2014.

Ever since, he has been on a mission to get The Boss to South Africa.

Springsteen was performing as part of the 1988 Human Rights Now! Tour - along with other celebrated artists such as Sting, Peter Gabriel and Tracy Chapman.

Two weeks have passed since Big Concerts brought Rihanna to South Africa, but for Van Wyk, to have Springsteen and the E Street Band perform in the country would be a career-capping catch .

"I'd still love to get Paul McCartney," he told The Times, yesterday.

"But I realised I couldn't call myself a promoter without having The Boss on my CV. I can kick the bucket now."

Van Wyk said he had spent years trying to negotiate with Springsteen's management.

He begged for Springsteen to perform a once-off show in Johannesburg before completing his Australian tour and even forwarded letters from South African fans who had written to him in the hopes of seeing the 20-time Grammy winner live.

Van Wyk was at a function in Hermanus in the Western Cape with friends two weeks ago when he got a call from an unfamiliar number with a +212 prefix (denoting New York).

It was Springsteen's longtime tour manager George Travis. He had good news.

Springsteen will bring with him an entourage of between 70 and 90 people. Springsteen and the E Street Band wrapped a 128-show tour at the end of March.

They will play Cape Town's Bellville Velodrome on January 28 and 29, and the FNB Stadium in Johannesburg on February 1.

The band will then head over to Australia for six shows and one in New Zealand.

Van Wyk explained that they could not secure the Cape Town Stadium because the 16-team African Nations Championship soccer tournament was being staged there at the time.

Tickets for Johannesburg (prices range between R360 and R1020) go on sale tomorrow. They will be available from Computicket and the Big Concerts website.

Cape Town tickets (ranging between R550 and R990) will be up for sale from Friday.

Springsteen has sold more than 65million albums in the US and more than 120million worldwide.