The Big Read: For whom the burger tolls 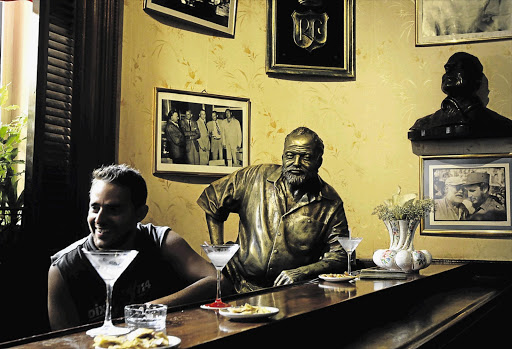 This week in 1954, in his small whitewashed farmhouse in the breezy hills of San Francisco da Paola with its views down the plain to the blue bay and white rooftops of Havana, Ernest Hemingway received word that he had won the Nobel Prize for Literature.

He acted grumpy about it, but it was a lifeline. Already he was failing, writing each day as a way of holding off despair. Hemingway felt alone, an old man in a small wooden boat on a vast ocean with broken luck. In seven years' time he would kill himself, but that week he wrote out in his own hand a set of instructions to his cook, Pablo, detailing how to make a hamburger.

Ever since finding a facsimile of that note, I've longed to make his burger for friends, to sit outside on a hot day with Cuban music and cold rum and taste what Hem tasted after a morning spent hunting big fish on the Gulf Stream and words at his desk.

I might never have done anything about it, but then I thought of calling it the Hemburger, and then it had to be done. A good name is its own imperative.

But the world has changed. The Hemburger calls for India relish and Mai Yen powder and Beau Monde seasoning. I lose track of whether or not we're boycotting Woolworths this month, but you may be sure there's no Mai Yen on the shelf beside the hake nuggets with lime and coriander.

A man is only as good as he does. I spent this week constructing my own Mai Yen and Beau Monde. That sounds unheroic only if you've never spent the suicide hours before sunrise with mortar and pestle, trying to wrangle celery seeds or grind a bay leaf; you can think that way only if you've never broken your heart over mace. I considered fighting my own bulls for the beef, but no one likes a show-off.

India relish was the problem. There is none locally, and that splendid cook and food writer Jane-Anne Hobbs cautioned me that food has changed since 1954, tastes have adapted to a world that wants to pretend it's younger. Today India relish is made with super-sweetened corn syrup; it bears the same relationship to the original that writers from university creative fiction programmes bear to a life-damaged, world-salted writer of 60 years ago.

India relish broke me. It breaks all of us, but afterwards some are stronger in the broken place. Jane-Anne, whom I had never met before, is making me a relish. "We are all alone, and never as alone as when we're cooking burgers for 13 people," said Ernest, but that's because he didn't have Jane-Anne Hobbs as a friend.

I am also making Papa Dobles, the sugarless double daiquiri that Hemingway composed in the Floridita bar on the corner of Calle Obispo in downtown Havana. He said that a well-made daiquiri should look "like the sea where the wave falls away from the bow of a ship when she is doing 30 knots", and drinking it should feel as light and dry as a downhill skier making his run over fresh powder.

It's a simple drink to make, but nothing is simple any more. It needs Maraschino liqueur and every bottle store, international hotel and speciality Italian delicatessen told me there is none to be had in South Africa. But people are kind. Hearing my plight, a web of friends and friendly strangers made calls and suggestions and wrote letters, and eventually somehow I was contacted by the Luxardo head office in Italy, which gave me an address in Kuils River.

I drove to Kuils River, but there was nothing. I was like the old man who has been going to sea in a skiff for 84 days without making a catch. Then the man in Kuils River phoned someone in Durbanville and I came home bearing the bottle like a marlin strapped to the side of my car.

My Hemburger day is tomorrow. I have 13 people coming, which is far too many for my hosting skills, but when you are sharing love, 13 is also too few.

My love for Hemingway runs deeper than hero worship. You can't love someone with no weakness, and Hemingway had weakness enough for all of us. I love him for his fear and the courage it took to live with it, and the strength to work every day until he couldn't.

He was right that we are alone, but he was wrong to feel it all the time. This week I felt the presence of people, their desire to help. Tomorrow I'll sit with friends and we'll raise our buns to Ernest and for a hot good afternoon we'll share the small wooden boat.