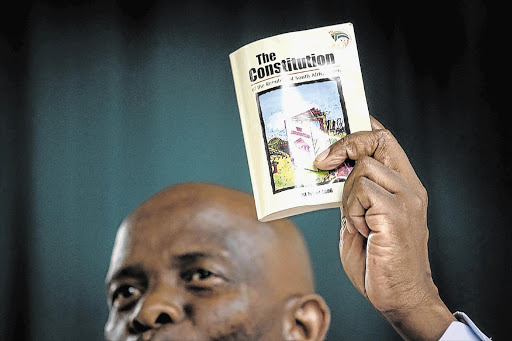 A copy of the constitution is held up by a presenter during consultation and public submissions on the Traditional Courts Bill at the Moretele municipal hall in North West. The Moretele community rejected the bill as it stands and would like it amended

The controversial Traditional Courts Bill was again condemned during an unprecedented third round of public hearings in North West yesterday, with many members of the public criticising the government for wanting to "impose apartheid stooges" on communities.

At the Moretele municipal hall - one of four venues around the province where the public hearings were conducted - Oupa Mokgatle of the Bafokeng community also queried why the bill had been brought back for public consultation without any substantive changes having been made since the last hearing 17 months ago.

"I don't understand why we are here," said Mokgatle.

"The constitution says everyone has a right to legal representation but this bill says we can't have a lawyer when we come before a traditional court. Nothing has changed; the bill just gives chiefs more power."

More people raised concerns about the bill's dismissal of the role of women in traditional processes and society generally; that non-performing chiefs, as public servants paid salaries by taxpayers, could not be removed and that "chiefs have too much power".

Question marks have been raised about the motives behind these public hearings as 95% of people who had attended the last round of hearings in North West had rejected the bill.

It has also been rejected by a majority of the provinces, with only the Free State and Northern Cape supporting it unconditionally - which means that it cannot be passed by the National Council of Provinces.

Noting the lack of changes to the bill, the Alliance for Rural Democracy, a group of civil society organisations, released a statement condemning the government for wanting to "consult until we change your minds".

ANC member of the provincial legislature, Hoffman Galeng, who chaired the meeting at Moretele, said his impression was that the gathering was "totally against the bill" and had decided to send it back to the national legislature "for amendments".