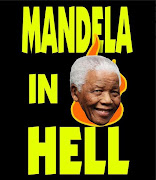 The Westboro Baptist Church claims that Nelson Mandela is burning in hell, in a series of tweets and a video on their website.

According to the church Mandela has been sent to hell for adultery, due to his divorce of his first wife Evelyn, and his marriages to the "wild murderess" Winnie Mandela, and the "young widow" Graca Machel.

"Mandela's in hell! Evelyn his wife. Bare him 2 sons. He fooled around & threw her out like trash. 1 Son died in crash. The other of AIDS"

According to Policymic the church plans to picket Mandela's funeral, but they have issued such threats before when famous people have died and not shown up.

According to the church Mandela's stay in hell will mean he will be in the company of Ghandi, John Lennon, Cory Montieth, Lou Reed, Mathew Shepherd, Steve Jobs, Whitney Houston, and just about any dead person who wasn't in the Westboro Baptist church.