Mandela statue to be unveiled on Reconciliation Day 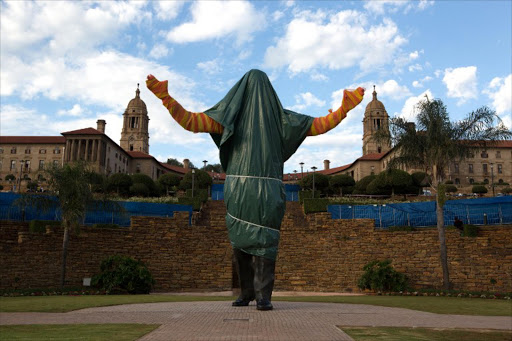 A covered statue of South African former president Nelson Mandela is pictured at the Union Buildings in Pretoria on December 13, 2013 on the last day of Mandela's lying in state. The statue will be unveiled on December 16, 2013.
Image: AFP PHOTO / IRINA KALASHNIKOVA

A nine-metre statue of Nelson Mandela will be unveiled Monday on a holiday dedicated to reconciliation, 24 hours after the solemn burial of the icon credited with South Africa's peaceful transition.

The 30-foot, bronze colossus will be officially unwrapped by President Jacob Zuma on the lawns of the Union Buildings, the seat of government in Pretoria where Mandela was inaugurated as South Africa's first black president in 1994.

Monday's ceremony will also mark the centenary in November of the building where apartheid-era heads of state signed off on many of the racial laws Mandela spent most of his life fighting against.

It is at the Union Buildings that the man lovingly called the father of the nation lay in state for three days last week, as up to 100,000 people stood in hours-long queues to file past his open casket and pay their last respects.

"The unveiling... signals the start of celebrating and living the late Madiba's legacy and the end of the mourning period," said a government statement -- using the clan name by which the democracy icon was fondly known.

Ten days of mourning declared after Mandela died on December 5 at the age of 95, officially ended at midnight on Sunday.

From Monday, the national flag will be raised from its half-mast position and fly as normal, said the government.

"Former President Mandela is associated with the promotion of reconciliation which is why the day was chosen for the unveiling," it added.

December 16 has been commemorated in South Africa for over 150 years.

It was at first called Day of the Covenant, honouring a victory of the early Afrikaners, mainly descendents of Dutch settlers, over the Zulus in an 1838 clash that became known as the Battle of Blood River.

But it is also the anniversary of the founding of Umkhonto we Sizwe (Spear of the Nation) -- the armed wing of the now ruling African National Congress, of which Mandela was the first commander in chief.

After South Africa's first democratic elections in 1994, the day was symbolically retained as a holiday and renamed Day of Reconciliation.