The Big Read: Freedom is under siege 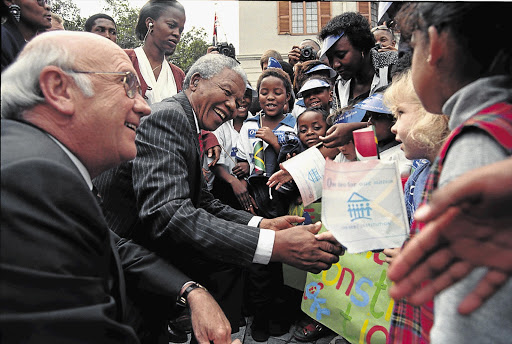 It is the lot of every woman and man: we are born, we live and then we die. Depressing, isn't it?

Indeed, many of us go through our lives with our eyes closed, with our minds unawakened, with the immense possibilities within our reach unrealised.

We reach death's door with the world no better for having hosted us. We die as men and women who were spectators at the ball. We leave no mark on our children, our friends or our surroundings.

Then you have Nelson Mandela.

It is a month and a day now since Mandela died at his Houghton home, surrounded by family and friends, at the age of 95. The world's leaders - the good and the bad, the dictatorial and the democratic, past and present - landed on our shores in their hundreds to pay homage to an extraordinary human being.

For us, a people blessed to have produced such a complex and exemplary leader, life now has to go on. The year lies ahead. Opportunities abound.

From the sounds made by our political leaders over the past few weeks it is clear that we will begin 2014 as we ended the dastardly and disappointing 2013. The scandal of Nkandla still rings in our heads like a stubborn migraine.

Most damning of all, we don't talk about Marikana any more. We don't ask how it is that 34 people are killed in broad daylight by an instrument of our democracy, the SA Police Service. The killings of trade unionists in Marikana continue unabated in the region. Yet, life goes on. How can we say we lead conscious lives, in a South Africa free from fear, when this happens?

We, the people, follow the depressing order of Everyman: we were born, we live, then we die. It should not be this way. If anything, Nelson Mandela's extraordinary presence among us here in South Africa, and his recent death, should teach us that a life lived looking away from the challenges of society is no life at all.

Speaking at his dear friend Walter Sisulu's 90th birthday in May 2002, Mandela said: "What counts in life is not the mere fact that we have lived. It is what difference we have made to the lives of others that will determine the significance of the life we lead."

Mandela knew what this kind of life meant. The fiery young man arrived in Johannesburg without much political inclination despite seeing strikes and boycotts in his brief spell at Fort Hare University. Then he met Sisulu, who took him in and showed him that there was a struggle to be waged and a country to be freed. Sisulu opened Mandela's eyes to the deprivations of his own life and of those around him.

He became free. It is the freedom that Mandela found in placing his life at the mercy of the struggle to liberate his fellow man and woman - black and white - from the smallness of apartheid. Even when Mandela and his comrades were incarcerated for 26 years - in Mandela's case 27 - their consciousness was elevated by the knowledge that they were not terrorists, as some labelled them, but people concerned with the struggles of the downtrodden.

And so in his biography, Long Walk to Freedom, Mandela gives us the kind of message that Sisulu showed him when they first met in the 1940s: "For to be free is not merely to cast off one's chains, but to live in a way that respects and enhances the freedom of others."

This is the challenge of South Africa as it celebrates its 20th year of democracy. There will be much, politically, to chew on this year. An election is coming up. The Farlam Commission will wrap up its work. The Nkandla Report will be released by the Public Protector. There will be strikes. It will be noisy.

The real challenge for South Africa, however, will be in the sphere of constitutionalism. A brilliant constitution was written and adopted in the 1990s. It is now under assault. The Protection of State Information Act has already been printed and awaits the president's signature. Various freedoms enshrined in the constitution are under threat, as evidenced by the use of apartheid-era legislation to hide the outrages of Nkandla.

Where will you be as these freedoms are trampled upon and taken away from all of us? Where will you be when the Traditional Courts Bill takes away the rights of rural men and women? Will you just live and let live?

A new year gives us a chance to be better than what we have been. Make your life meaningful this year. Stand up against the assaults on our constitution. In this way you will be defending the poor against a greedy elite that has lost its way.