Clouds of butterflies descend on Joburg 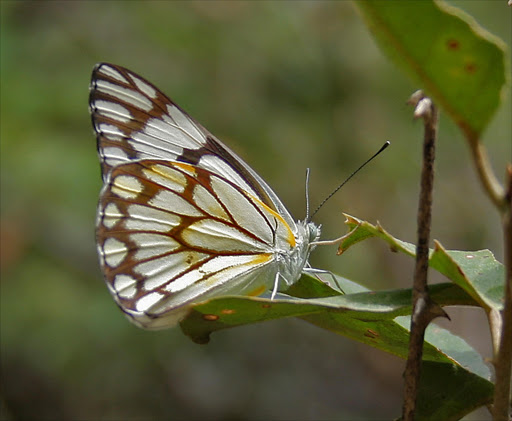 Swarms of white butterflies have descended on Johannesburg during their annual migration from South Africa's west coast to Madagascar, lepidopterist Earle Whiteley said on Saturday.

Whiteley, a director of Conservation of Butterflies in SA, said that the spectacle was an annual event, but that the clouds of Belenois aurota, commonly known as brown-veined white butterflies, did not always follow exactly the same route.

"They start hatching along the entire coast from Cape Town towards Namibia, then migrate inland in a north-easterly direction."

Whiteley said that the initial batch of butterflies were joined by more and more along their migratory route, over the Eastern Cape, which had now reached Gauteng.

The butterflies would then head toward Mozambique before crossing the sea to Madagascar.

"As they are going further north, some die and more join. Eventually, there are massive clouds of butterflies, reaching up to a kilometre into the air."

Along the route, the female butterflies laid eggs, which would begin the life cycle of the next generation.

The timing of the migration was dependant on weather conditions, but usually ran from late November to mid-February. The brown-veined white butterflies were often joined by other butterflies of the same Pieridae family, which had shades of yellow or orange in their colouration.

The butterflies travelled from sunrise to dusk and needed to replenish themselves with nectar every 20 minutes or risk dying from dehydration. They favoured long grass and were particularly attracted to grass nectar, Whiteley said.

The butterflies roost overnight, and it was possible to tell whether a butterfly was awake or asleep by looking at their feelers.

"If the feelers are touching, then they are sleeping."

Whiteley was working towards establishing the Gauteng Butterfly Sanctuary, which is expected to open in December.