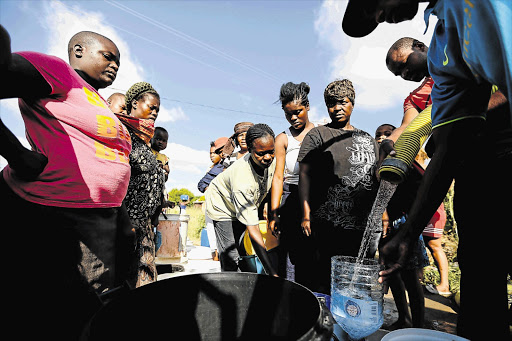 WATCHING EVERY DROP: Following a week of protests, water tankers rolled into Mothotlung in North West yesterday. Some residents have been preventing the privately owned tankers from entering the area because they believe their owners are benefiting from a racket involving municipal officials. File Photo
Image: MOELETSI MABE

Sabotage, cronyism and self-enrichment make up the cocktail of dirty dealings behind the water crisis that led to three people being killed in a North West town this week, residents and council officials say.

The Times has learned that the government knew as early as last year about allegations of "deliberate" tampering with the water supply in Madibeng.

The motive was said to be the enrichment of owners of water tankers, who are alleged to have paid kickbacks to some municipal officials.

It took the loss of three lives in Mothotlung this week for Water Affairs Minister Edna Molewa to promise to look into how three pumps at the Madibeng water-treatment plant could break down at the same time.

Three people have died and two have been seriously injured in the Mothotlung protests about the lack of water. Mike Tshele, 62, and Hosia Rahube, 30, died on Monday when police allegedly opened fire on protesters with live ammunition.

Shadrack Mahlangu, 27, died in hospital yesterday morning. He was allegedly thrown from a speeding police Nyala.

Molewa said the families of those killed, and community leaders, on Tuesday told her and Police Minister Nathi Mthethwa that municipal officials who benefit from water-tanker services had tampered with the water pumps. It was for this reason, they said, that the community rejected the use of water tankers.

They launched their protests on Sunday night.

"The government delegation has committed itself to instituting investigations into the alleged sabotage that resulted in water supply interruptions in Mothotlung, Damonsville and part of Mmakau," Molewa said.

President Jacob Zuma stepped in late on Tuesday night, ordering the military to be on stand by to supply water to the affected areas.

The army's engineering command was told that for the past five years the municipality has been spending R1.3-million a month on privately owned water tankers to supply Madibeng.

"This needs to stop. This money could be spent on refurbishing the infrastructure and to buy our own water tankers," an ANC councillor said.

There are also complaints from residents that the water tankers deliver "dirty, stinking water" in trucks that were once used to pump out sewage.

A team appointed by the then minister of cooperative governance and traditional affairs, Richard Baloyi, in February reported allegations "that water disruptions are/were deliberate ... meant to enable those who own water tankers to charge for water supply to members of the community at an inflated price".

The allegations were, however, not looked into, though the report found that water disruptions had resulted in "many parts of the municipality going without water for lengthy periods".

The report was tabled in the Madibeng council in Juneafter being ignored for months.

Molewa's spokesman, Sputnik Ratau, said yesterday that he was not sure whether the minister was aware of the report.

But he said Molewa felt that the allegations of tampering with the water supply must be investigated.

"The minister is very interested in establishing the facts around this allegation.

"If [the water supply disruption] is intentional, there is a need to find out who are the culprits so action can be taken," he said.

Madibeng local municipality spokesman Solinda Mnisi said Baloyi had sent a technical team to verify the allegations but it left without finishing its work and tabling a report.

"The team interviewed municipal officials and community members and was provided with documents, but the team just left after four months without completing its work. Therefore this will remain an allegation," he said.

Mnisi said the amount said to be paid monthly to owners of water tankers might be exaggerated but the technical division of the municipality would establish the correct figure.

Pupils at 13 schools in the area were sent home yesterday because there was no drinking water and the toilets could not be used.

Bojanala district education director Maropeng Seshibe said: "We cannot keep pupils here without water ... We had hoped that by now our government would have made a plan."

Army Colonel Petrus Manser said the army had been ordered to assess the situation in the area.

"We are here to assess and see how we can help.

"We have 20 water purification engineers and 16 water tankers on standby in Pretoria," he said.

Colonel Manser said the municipality had assured him that the water supply would be restored by today. He said that if this did not happen the army would supply water until the problem was solved.