'No rain' from boxing champ 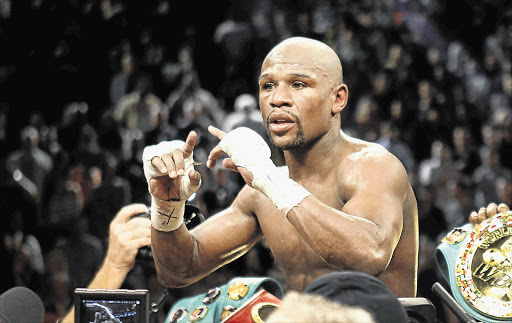 RING KING: Floyd Mayweather, who has fought 45 times without defeat, will visit South Africa next week as part of a campaign to develop the sport of boxing in the country
Image: STEVE MARCUS

Soweto fans of world-renowned boxing champion Floyd "Money" Mayweather Jnr were disappointed yesterday when he did not "make it rain" - with money.

Simphiwe Mqina, who travelled all the way from Diepsloot, northern Johannesburg, was hoping to catch a couple of greenbacks or purple R100s tossed into the crowd by the US boxer.

"Yes, he is a boxing champion, but, let's face it ... Floyd Mayweather knows how to spend money and I like that. "It's a pity he didn't make it rain on us like I thought he would," Mqina said.

Mbalula and the widow of South African boxing champion Jacob "Baby Jake" Matlala, Mapule, and her two sons, Tshepo and Masego, joined Mayweather on stage at Dube Community Centre, Soweto, for the unveiling of a plaque at the renaming of the venue. It will be known as the Baby Jake Boxing Academy.

Mayweather, 36, is the reigning pound-for-pound king - with a net-worth of over $150-million.

The five-division world champion arrived at the centre in one of three black Bentley Continental GTs.

He was surrounded by a 16-man entourage, including his fiancée, Chantel Jackson, numerous bodyguards - who towered over the 1.73m boxer - and some South African friends, including Metro FM's T-Bo Touch.

Though there were those who flocked to the centre just for Mayweather's rumoured money giveaway, others - young and old, men and women - came to catch a glimpse of their favourite athlete.

A 15-year-old, who asked not to be named, said he bunked school to see his "favourite living boxer", even if it was for less than 30 minutes.

"I love boxing because it is such a disciplined way of releasing stress. I look up to Mayweather."

"You need to believe in yourself. Stay hungry, work hard and push yourself. It takes three things to be a good boxer: a sharp mind, tremendous heart and a great chin."