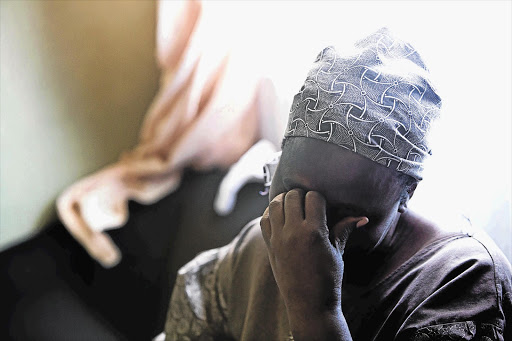 INCONSOLABLE: The grandmother of a nine-year-old left to die after a particularly vicious rape in Delft, near Cape Town
Image: HALDEN KROG

She was raped, set alight and left for dead at the weekend but the nightmare might not be over for the nine-year-old from Delft. She might still have to face a gruelling interrogation when the case goes to court.

"Why were you wearing that? . How do you know his penis penetrated your anus? . Do you have eyes in the back of your head?"

These are some of the questions attributed to magistrates hearing sexual offences cases. They have been accused of making intimidating remarks and drawing unjustified conclusions about victims based on perceptions about the victim's relationship to the accused, her dress and her behaviour.

Magistrates have also been accused of failing to stop hostile interrogation of a victim.

Some magistrates take into account the lack of physical injuries to a victim, that the victim knew the perpetrator and whether the victim was a virgin - despite the law prohibiting consideration of all of these factors .

Samantha Waterhouse, of the Community Law Centre at the University of Western Cape, said she had heard magistrates describing rapes as "not bad" because the accused was the victim's partner.

Research associate at the Wits Institute for Social and Economic Research Lisa Vetten referred to a case in which, during sentencing, the magistrate asked a victim if she had a boyfriend.

When the victim said that she did, the magistrate concluded that she had not been traumatised by the rape.

Shaheda Omar, of the Teddy Bear Clinic, referred to a case heard in Johannesburg in which the magistrate asked the victim why her rape had not resulted in a "generalised fear of males'' since she had a boyfriend.

Omar said that the "lack of sensitivity and knowledge" of court personnel led to "secondary victimisation" and, in some cases, the withdrawal of complaints.

Experts told The Times that rape judgments and sentences were inconsistent.

"Inconsistency gives the public the sense that the process is unfair. There is a lot of anger when someone walks away with a reduced sentence," said Sonja Bornman, of the Women's Legal Centre.

Experts believe the solution lies in training. But, they say, some magistrates refuse to undergo training, claiming that they have nothing to learn, and others say they cannot accept training other than by the Department of Justice because they must be seen to be neutral and objective.

However, director of media relations at the Office of the Chief Justice, Lulama Luti, said that 280 regional court magistrates and aspirant magistrates had received training to deal with sexual offences. She added that it would be “premature” to comment on the allegations about magistrates’ inappropriate comments as she wasn’t “presented with the full facts”.