Zuma learns that friendship is fleeting 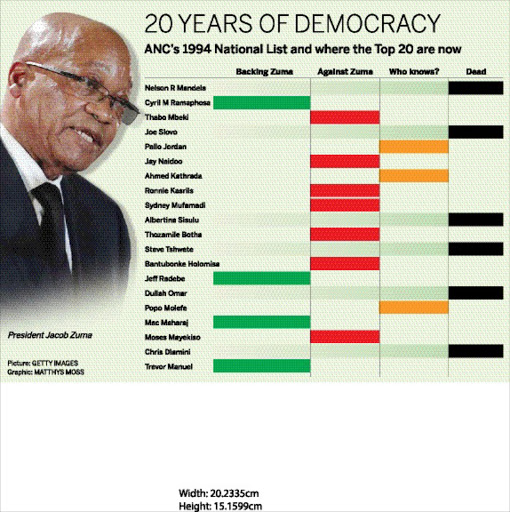 Almost 20 years ago to the day, the ANC released its 1994 national election list. At the top of the list was Nelson Mandela, with his preferred successor, Cyril Ramaphosa, second and Thabo Mbeki third.

In the two decades since the list was released, much water has passed under the ANC's bridge. Six of those in the top 20 - Mandela, Joe Slovo, Albertina Sisulu, Steve Tshwete, Dullah Omar and Chris Dlamini - have died.

Of the remaining 14, only four can be said to be "loyal" to President Jacob Zuma.

Ramaphosa stood on his slate at the 2012 Mangaung conference, Justice Minister Jeff Radebe and National Planning Commission chairman Trevor Manuel sit on his cabinet, and Mac Maharaj is his spokesman.

Seven are out of favour or highly critical of Zuma.

Mbeki is out in the cold after being removed from the presidency. Jay Naidoo is highly critical of the government's service delivery and its failure to deal with poverty.

Ronnie Kasrils is an outspoken critic of attempts to muzzle the media through secrecy legislation and of the politicisation of the security services. Sydney Mufamadi's close association with Mbeki has made him an exile of sorts. Holomisa was expelled from the ANC and is the leader of the United Democratic Movement, and Moses Mayekiso resigned from parliament in protest at the government's poor track record.

Exactly where Pallo Jordan, Ahmed Kathrada and Popo Molefe stand on Zuma is not clear.

Jordan was excluded from Zuma's cabinet and Kathrada has been outspoken about what he calls "threats to our democracy".

He wrote in the World Policy Journal: "It is disturbing that, 18 years into our democracy, elements in the ruling party regard opposition parties as enemies and not as rivals.

"Opposition parties have been, and still are, the established ingredient of all democracies."

Kathrada has also criticised "utterances by senior leaders regarding the judiciary and their calls for a review of the constitution", which he described as "matters of grave concern".

Raymond Suttner, who was 30th on the list, has become an outspoken critic of corruption, recently publicly refusing to campaign for the ANC in Western Cape as a matter of principle. In a letter to ANC Western Cape leader Marius Fransman, he wrote: "I cannot in good conscience campaign for an ANC that condones [the spending] of millions and millions of rands on the president's residence."