Corruption is killing the poor 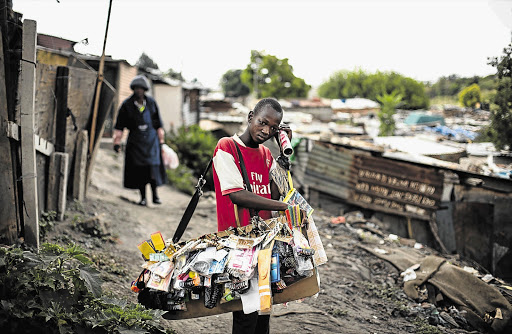 HUSTLING: Phillip Mhlanga, 15, selling his wares in Alexandra, Johannesburg. He tries to send money back to his family in Mozambique. Despite living in one of South Africa's most impoverished communities, he believes life here is better than in his home country.
Image: DANIEL BORN

"Bread is all that they have eaten. It has been days since my children had anything else.

"The R6 given to us today is the difference between life and death for us."

Standing against the door of her Diepsloot shack, which she rents for R150 a month, Chilidzi Mbedzi cradles her one-year-old son, Trevor.

"Sharp!" he feebly showed his thumb.

He last ate three days ago. His meal: several slices of bread with butter.

"A friend gave me R6. I bought bread because it was all I could afford. Trust used to be in school. He was fed once a day but because I don't have an identity book they threw him out.

"Our neighbours help but their children are also hungry. With no identity documents, we are the living dead."

According to Oxford University , in the UK, Mbedzi is among 6 million South Africans living in poverty.

The university's Global Multidimensional Poverty Index - along with the release last week of the University of Cape Town's Carnegie3 conference report - paints a grim picture of the hardship endured by millions of South Africans.

Much of the blame for their plight is the theft since 1994 of R700-billion attributable to corruption, according to Paul Hoffman, head of the Institute for Accountability.

This thievery has denied 11million citizens relief from poverty, he says.

"A five-year-old boy died when he fell into a pit latrine at school. Had the school been adequately funded by the Education Department, and properly supported by the Public Works and Water Affairs departments in accordance with the state's duty to respect, protect, promote and fulfil its human rights mandate, the boy's right to life and basic education would have been guaranteed."

If the R30-billion lost annually through corrupt tender processing, and the money returned to the Treasury every year because the public service does not have the capacity to spend what was voted to it, had been efficiently and effectively used for poverty alleviation "half of South Africa's population would no longer be poor".

The Carnegie3 report states that poverty is widespread in South Africa and "inequality profound".

It shows that 10% of the country's poorest households are failed by social grants.

It cites research showing that:

More jobs are being destroyed than created;

About 11.3million children live in poverty, and 1.3million of them do not benefit from state grants;

Food insecurity is worsening and there are no policies to alleviate it despite "massive household food insecurity";

A child's sex, ethnicity and place of birth have a huge effect on opportunity;

80% of pupils leave school with an education that does not prepare them for work; and

Many households have to sell assets to cover their health expenses.

Sabrina Alkrie, director of Oxford University's poverty and human development unit, said: "Though South Africa has a relatively low poverty rate, it is the type of poverty people are living in, and the number of vulnerable citizens, that is alarming."

"Six-million are not just income poor, but [also] in terms of lack of sanitation, housing, electricity, education and nutrition."

Child mortality is disproportionately high among these people.

South Africa is one of the 11 worst among 104 developing countries in terms of vulnerable populations, with 6million of its people living on under $1.25 (R13.87) a day.

"People suffer from significant deprivation ... the biggest drivers being child mortality and lack of sanitation."

Leonie Joubert, a food security expert, said: "The poorest of the poor are not getting the food they need . They buy cheap food with no nutritional value . they buy food to keep hunger at bay."

She said the cost to the nation of child malnutrition was huge.

"From the moment of conception until a child turns two, adequate nutrition is critical for the development of the brain.

"If the child doesn't get the right nutrients during this period he can become permanently cognitively stunted.

"A child with a malnourished brain will have a lower IQ. He will under-perform, emerge from school less educated and be less employable as an adult.

"The World Bank estimates that this kind of malnutrition shaves about 10% off lifetime earning potential."

Professor Philip Harrison, holder of Wits University's research chair in development planning and modelling, and a member of the National Planning Commission, said the extent of poverty was a national crisis.

"Oxford University's Global Multidimensional Poverty Index is helpful. It takes us beyond looking at income poverty.

"If you have a job but can't access basic services, you cannot have a reasonable standard of living."

"Anything that makes it difficult to produce jobs and deliver for reducing poverty."