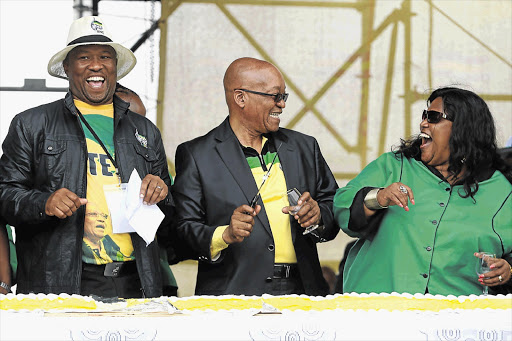 President Jacob Zuma has warned disgruntled ANC members against leaving the party when things do not go their way, saying those who leave will attract the wrath of their ancestors.

Unveiling the party's provincial manifesto at Idutywa Stadium in Eastern Cape yesterday, Zuma said: "It is wrong to leave the ANC. In fact, it is cold and rough outside the ANC. People must remain in the party and try to fix things internally because those who do leave, they will attract the wrath of the ancestors, who will also bring that person bad luck."

Zuma said this as he welcomed more than 100 members who had defected from the United Democratic Movement and COPE.

Zuma and some ANC members have over the years made several faux pas:

"The ancestors will turn their backs against you and you will have bad luck forever if you leave the ANC unhappy," he said in Phola outside Lichtenburg.

Among those who returned to the ANC were former COPE MPL Nkosinathi Kuluta and the party's former provincial communications head, Nkosifikile Gqomo.

Both defected after the ANC's Polokwane conference in 2008.

Both Gqomo and Kuluta yesterday said they had made the "very tough decision" after realising that there was no other political home that could advance their interests other than the ANC.

Kuluta said he was persuaded by Zuma and the provincial ANC secretary Oscar Mabuyane to come back to the ANC.

Zuma also touched on issues of fighting corruption, which he said was one of the party's and government's biggest enemies. To eliminate corruption in the government, he said the ANC was in the process of scrapping tenders.

"Tenders are the root of corruption in the government. They have messed up our country. We are aiming at centralising the tendering process through a central tender board," Zuma said.

He later urged those in the ANC and the government who had been implicated in corruption "to do the right thing and resign before we do something about you as the ANC".

He told the 35000-strong crowd that his government was "fighting tooth and nail" to address the land issue, which he said was still in the hands of a select few.