Cops under siege as anger explodes 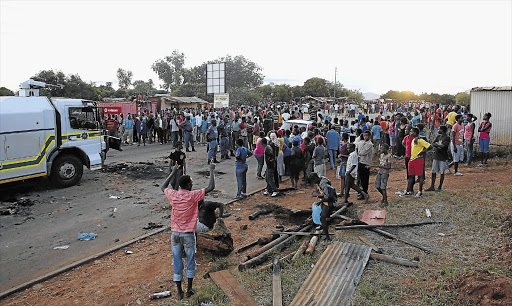 UP IN ARMS: Residents of Relela, near Tzaneen, gather in the main road to protest against the release of two murder suspects. Three protesters were shot dead in clashes with the police
Image: SYDNEY SESHIBEDI

A Limpopo village was under siege yesterday as thousands of angry residents demanded justice following a night of deadly clashes between police and protesters.

The violence at Relela, near Tzaneen, claimed three lives.

As tensions rose yesterday the police sent in reinforcements of heavily armed officers in armoured vehicles and riot gear.

The police blocked roads around the village and the residents - who had stormed the satellite police station on Tuesday night, injuring 15 officers - barricaded roads in the village with burning tyres, logs and steel structures.

The violence reached a crescendo on Tuesday when villagers demanded to be told why the killers of Kgomotso Rakgolane had not been be arrested.

Rakgolane's badly mutilated body was found 8km from her home on Friday. Within hours of the discovery, police took two men in for questioning but later released them. Irate residents torched the men's homes. As police tried to restore order, a 15-year-old, Tshepo Baloyi, was shot dead.

Residents' anger boiled over on Tuesday night when between 1500 and 2000 people stormed the police station. Officers - claiming to be defending themselves - shot dead Mozere Molele and Mohale "Lighty" Seloa.

The latest deaths bring to eight the number of protesters believed to have died at the hands of the police in recent weeks.

Four deaths were reported in Mothotlung, in North West, and one at Durban Deep, in Roodepoort, western Johannesburg.

By late yesterday evening, thousands of residents from nearby villages were preparing to join their neighbours in protesting.

"The police can bring their boss. We do not care. We will die fighting for justice," said a youth, hurling insults at national police commissioner Riah Phiyega as her motorcade left Relela last night.

Phiyega had rushed to Relela to visit injured police officers and to be briefed on the situation.

"What is happening is not good. If this continues on the spiral it is following, it's going to get out of control," Burger said. "These groups are highly militant. They know the police weaknesses in terms of numbers, training and now fear. They will use it ... they will taunt the police to react ... to do what happened on [Tuesday] night.

"The police are using force when they should not, and people are dying. It is about so many problems. Something must be done before more die," he warned.

But nothing, it seems, will calm the anger of the Relela villagers.

"We don't want to be calm. We don't trust the police. We go to the police but they fail us. They never give us answers," said David Lefuths, whose cousin, Molele, was one of those killed.

Raymond Lefuphona said the police had failed the village.

"This is why we want to destroy them and their police station. They must leave us to handle our own justice," Lefuphona said.

"Phiyega wants cooperation but what do they do for us? Nothing. Instead, when we demand justice, they kill us."

Police spokesman Brigadier Hangwani Malaudzi said the officers injured in the attack on the police station had been discharged from hospital.

"The police are here to help but the communities don't understand that. We need to work together but they don't want to. We tried to explain the situation with the investigation but they were not listening," he said.

He said the officers involved in the shooting had no choice but to react in the way they did.

"They were defending themselves against armed protesters who, despite minimum force techniques being used, continued to charge and try to storm the police station."