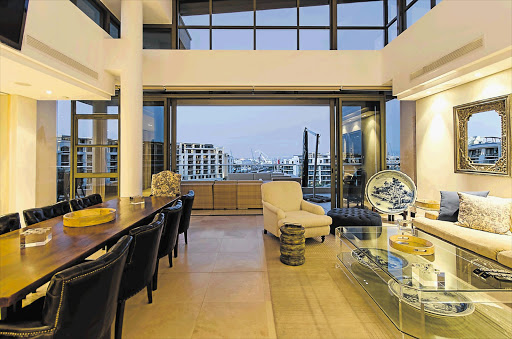 SOUTHERN COMFORT: This state-of-the-art penthouse at the V&A Marina recently sold through Pam Golding Properties to a Nigerian buyer for R25-million

Africa's wealth is going south, but not in a bad way. While Europeans are snatching up exquisite South African properties, African buyers are not far behind.

Cape Town remains the choice location for the rich.

Denise Dogon sold a R65-million Bantry Bay house to a West African businessman. A Nigerian bought a Clifton penthouse for R33-million and then spent R10-million upgrading it, and a Nigerian couple flew in their London decorators to spruce up their new house.

"In the last two years there has been a significant rise in affluent African buyers. We have had some of our top sales from African buyers, usually those from oil-rich countries," said Dogon.

Seeff said Atlantic Seaboard and City Bowl properties valued at R1.725-billion sold to foreigners last year - 20% of whom were African, a 50% increase in sales compared to the 2011/2012 period. A possible reason, said Seeff's Ian Slot, is the weak rand. He also noted the establishment of South African Tourism's first office in Lagos.

"That will draw increasing visitors and buyers from these growth markets. On the SADC front, we note an increase in buying activity from Zimbabweans," he said.

Laurie Wener, managing director for Pam Golding Properties in the Western Cape, said in the last 10 months 22% of their buyers in Cape Town had been foreigners.

"Over the past quarter apartments close to the universities in the southern suburbs have been in high demand by parents for student children from African countries," said Wener.

"It makes sense that when the rand drops, we see increased foreign interest on all levels," he said.