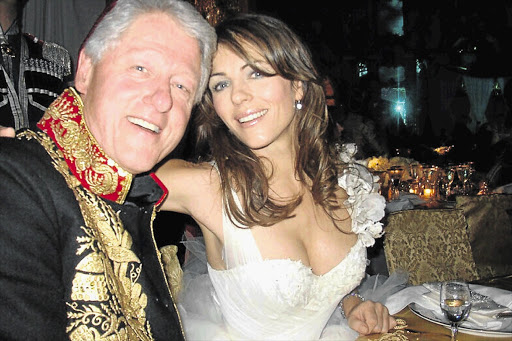 CLOSE BUT NO CIGAR: Bill Clinton and Liz Hurley at a charity dinner in Russia in 2005

Actor Tom Sizemore has admitted that his sensational claims of an affair between Liz Hurley and former US president Bill Clinton were made up.

Those hoping the former US president really did send a private jet to whisk Hurley to the White House will be sorely disappointed. Less than 24 hours after his bombshell claims made headlines around the world, a sheepish Sizemore confessed he had never met Clinton, had never been to the White House and was high on drugs when he recounted the tale. He apologised to Hurley, who tweeted that the "ludicrously silly" matter was in the hands of her lawyers.

Sizemore was caught on video boasting that Clinton pulled him aside at a film screening in the White House and asked for Hurley's phone number. He then claimed to have seen Hurley arrive via private jet hours later and disappear into a room with the former president, with Hillary Clinton in the next room.

In the video, Sizemore claims the president demanded Hurley's number with the words: "Give it to me. You dumb mother******, I'm the commander-in-chief of the United States of America."

He said Clinton then phoned Hurley and, when she didn't accept an invitation, said: "I don't have time for this ****. I'm keeping the world from nuclear war ... I'm sending a plane ..."

Yesterday Sizemore said: "I'm not denying that I said these things ... they're the rantings of a guy who had a very severe drug problem. None of it's true."