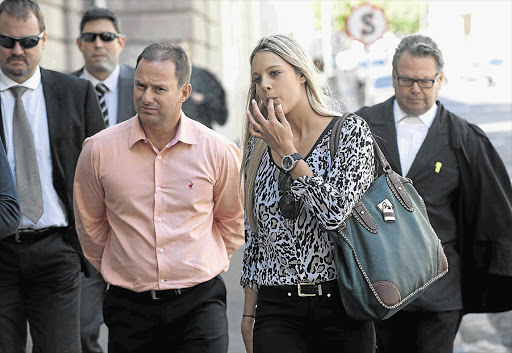 Yesterday the Cape Town High Court ordered that she could be hauled before a SARS tax inquiry.

Her father, Cape Town businessman Gary van der Merwe, has been involved in tax fraud litigation amounting to millions of rands for almost a decade.

The 21-year-old model claimed late last year that an unknown Arab admirer gave $15.3-million (about R168.3-million) after she caught his eye at a private Seychelles resort.

While her father pleaded poverty, authorities suspect that he is the person who put the millions in her bank account.

In December, SARS launched a tax inquiry into the financial affairs of Van der Merwe, his daughter and 11 others linked to him.

The family then tried to interdict SARS from hauling them before an inquiry and tried to contest the constitutionality of the Tax Administration Act.

Said the model: "I have only just turned 21 years old and work as a model. Since September last year my life has been devastated by the draconian actions which SARS has taken against me.

"I am now to be subjected to an inquiry which I read is allegedly costing R135000 a day."

Both father and daughter also sought access to SARS' court documents when the application for the inquiry was made.

But Judge Anton Veldhuizen dismissed the application for an interdict and ordered that they pay the costs of SARS counsel.

The Van der Merwes' lawyer, Cornel Stander, said they are yet to decide what legal steps to take.

"I have a consultation scheduled with counsel and then we will make a decision," said Stander.