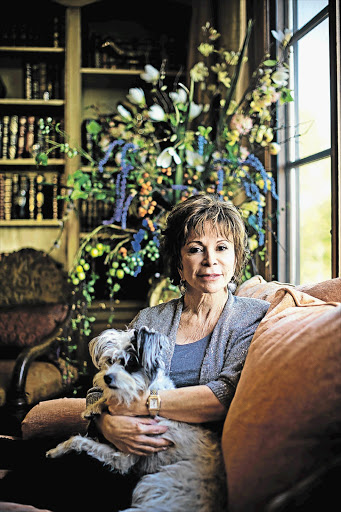 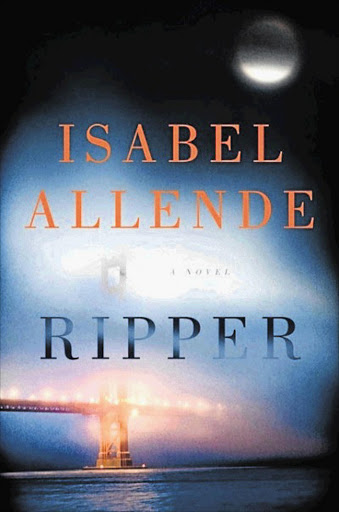 Isabel Allende hands me a tiny scuffed white shoe. "This was Paula's shoe when she was a baby."

There are tears in her eyes, but she is smiling. Her daughter died more than two decades ago at the age of 28 and Allende's casita (a freestanding room usually found in the back yard of a home) in Northern California, where she writes all of her books, doubles as a shrine to her.

The day before we met, Allende lit a candle to her daughter and asked her for help with her new book. "Yesterday was my sacred day: January 8 - it is the only day I ever start a new book. I said: 'Paula, Paula, please help me.' I know she's not here but she's somewhere."

The candle sits beside a photograph of her daughter signing her wedding certificate in 1991, shortly before she fell ill with porphyria and slipped into a coma. On her honeymoon, although completely healthy at the time, Paula foresaw that she would soon die and had written a letter urging her husband Ernesto and family to move on without her and be happy.

For Allende, the effort is occasionally too much: "Sometimes, still, it hits me like a rock and then it's a bad day. I wake up with that feeling of terrible loss and anything can make me cry. But most of the time I'm fine."

It is a tribute to Allende's warm personality that Ernesto is now her neighbour in San Rafael. On a shelf in the casita - which is in the garden of her large house overlooking San Francisco Bay - is a picture of him with his second wife, Giulia, with whom he has twin 11-year-old girls.

Allende - whose 20 books have sold more than 60 million copies and have garnered 50 awards - is remarkable. Exuberant and funny, she seems to relish life, even though it has been far from easy.

She greets me at the door of her house like an old friend, her two dogs cavorting round her heels, and urges me to have a glass of wine even though it is before 10am. When I decline she pours herself a glass, and, although she drinks just a sip, she is soon divulging intimate details of her life.

It is this willingness to share that has been the foundation of her career. One of her most successful books is Paula, which she wrote as her daughter lay dying. It is both a tribute to her daughter and an account of her own life. "I think I write fiction, but I don't."

Describing her childhood as "absolutely miserable", she adds: "Thank God, because what are you going to write about if you don't struggle as a child? I don't think you become creative because you have struggled, no, but creative people are fuelled by anger and passion, and haunted by demons and memories."

As an adult she endured the 1973 military coup in Chile - when Salvador Allende, the president of Chile and her father's cousin, was overthrown and Augusto Pinochet came to power. Following a series of death threats, Allende herself went into exile in Venezuela.

Her first marriage to Miguel Frías, the father of her two children, failed. Her second marriage to William Gordon, although happy, has been fraught with tragedy. Between them, they have lost three children.

"We have just been through another hellish year," she says. "My husband's youngest son died last year of an overdose. It is his second child to die [from an overdose]. My husband collapsed.

"I think people who are depressed fall in love with the darkness and start spiralling down, and when you live with somebody in that state, there is no way that you can escape the black cloud over the house."

Gordon, a lawyer and crime writer, whom she married in 1988, appears in the kitchen.

Originally, she had planned to write her latest book, Ripper, her first crime novel, with Gordon.

"But it was never going to work," she jokes as she sits in an armchair, a dog in her lap. "He writes in English, I write in Spanish. His attention span is 11 minutes, mine is 11 hours. I would do all the work and he was going to get half the credit. No way."

Ripper, like all her books, draws on the people she knows. "I keep writing about the same characters: weak or absent fathers, frail mothers, and then a very strong female protagonist who overcomes all the odds to succeed."

Allende's own father, a diplomat, left the family when she was two.

"My father left my mother stranded in Peru with two babies and pregnant, full of debts."

Allende saw her father only once again - decades later, dead. "He died in the street of a heart attack and the morgue called me. I thought it was my brother so I ran there but I didn't recognise this naked fat man."

Her mother took her three children back to her parents' house in Chile.

"We lived in an affluent house but with no money. My mother did not even have cash to buy us an ice cream. I wanted to be like my grandfather because my mother had a terrible life and he had the privileges, the power and the freedom and the car.

"That was the moment I started to rebel against all male authority: the police, the church, everything. I was so angry and my mother was worried because she thought I was never going to catch a husband."

In fact, she met her first husband as a teenager. "He was the first boy who looked at me, and I clung to him like a crab." Paula was born in 1963, and a son, Nicolás, three years later.

Unlike her mother, Allende was determined to work. "I am a complete feminist. I think it was a reaction against seeing my mother as a victim."

She became a strident journalist, writing shocking - sometimes invented - articles ("I had no problem exaggerating or making up quotes," she told one interviewer). "If the coup hadn't happened I would probably still be a journalist, a lousy one."

As we talk, the telephone rings and Allende calls out, "I'm not available unless my mother has died." Turning to me, she says, "My mother is immortal. She is 93. she lives in Chile and we still write to each other every day."

She does not know what form her next book will take but will follow her usual routine of locking herself in her casita for at least eight hours a day.

"At the beginning it is so difficult. I write and I write and I write, even though I know it will all go in the trash. I consider it like sport: nobody sees the training. Then, when the story starts to flow, it is paradise for me. Willie calls me in for dinner and I don't want to come."

Now 71, Allende knows there is more sadness ahead. "I know that probably in the near future, one of my parents will die [her stepfather is 97], and my dog Olivia. My ageing hit me last year. You can still pretend you're young when you are 69 but not 70, for God's sake. I keep telling my son that when I don't have any control over my bowels or I start looking like s***, he must kill me."

Nicolás lives next door. In true Allende fashion, his life sounds like something out of one of her more far-fetched novels.

"He and his Venezuelan wife divorced because, after having three babies, she found out she was gay. She fell in love with my stepson's fiancée, whose wedding dress was in my closet. It broke the family in pieces."

Despite everything, Allende still counts herself lucky. "I have had darkness and tragedy but also a lot of success. I don't think anyone can go through life without anything happening to them. With me, it just seems to be more exaggerated."

What the critics say about 'Ripper'

This ungainly, charming book is the author's own eccentric notion of a murder mystery, and it's fun to read.

Overflowing with morsels of Nancy Drew, mouthfuls of Agatha Christie, a sprinkle of Barbara Cartland and dashes of James Patterson and Tom Clancy. W hat lingers is Allende's generosity with fictional detail, her warmth and humanity.

Allende does conjure up a surprising twist at the end, but by then most smart readers will be trying to cleanse all memory of this tedious romp.  Maureen Corrigan, The Washington Post