Is Oscar Pistorius the boyfriend from hell? 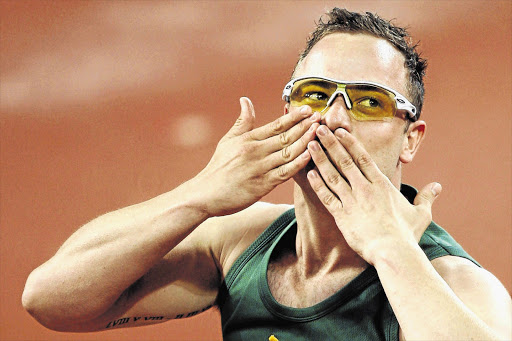 Jealous. Grumpy. Controlling. Judgmental... Only Judge Thokozile Masipa can decide whether Oscar Pistorius murdered Reeva Steenkamp, but many would agree that, on the evidence led so far, he was not a nice guy to date.

Text messages between murder accused Oscar Pistorius and his model girlfriend Reeva Steenkamp indicate that she was in "a typically abusive relationship".

This is the professional opinion of clinical psychologist Leonard Carr, who has often been called to testify in court as an expert witness.

Carr based his comments on a close analysis of a lengthy WhatsApp message Steenkamp sent to Pistorius on January 27 last year and on his response to her.

The court heard that 90% of the exchanges between the couple were "loving" and that they called each other "Angel" and "Baba".

Two messages among the 1709 extracted from the couple's iPhones were highlighted by data analyst Captain Francois Moller, one of the state's expert witnesses in the High Court in Pretoria this week.

The messages again raise questions about how Pistorius treated his girlfriends, after ex-girlfriend Samantha Taylor testified earlier that the Paralympian had often shouted at her.

Taylor said there were several times when he screamed at her - and her friends and family.

Carr said the messages between Pistorius and Steenkamp suggested "a highly controlling relationship".

Pistorius was "highly manipulative" and had "an overdeveloped sense of entitlement", said Carr.

In her message, Steenkamp wrote: "I am scared of u sometimes and how u snap at me and of how u will react to me."

She started her message by questioning why she was writing to him first.

She went on to say: "But perhaps it says a lot about what's going on here. Today was one of my best friend's engagements and I wanted to stay longer. I was enjoying myself but it's over now."

Carr said her comments were typical of those of an abused woman: "She starts by expressing her need and makes her point. Then she withdraws and says 'But it's over now'. She's not standing her ground in her power."

Steenkamp gave a glimpse into Pistorius's character when she wrote: "You have picked on me incessantly since you got back from CT [Cape Town] and I understand that you are sick but it's nasty."

Carr said this revealed the athlete's "controlling kind of behaviour, undermining her".

Another insight into his character is revealed in this line from her: "I was not flirting with anyone today. I feel sick that u suggested that and that u made a scene at the table and made us leave early."

Said Carr: "She's starting to justify her being, which tells you she's under surveillance and obviously he calls her to account for anything that he qualifies as flirting.

"He's punishing her for apparently flirting, humiliating her in front of friends, which escalates the punishment, and also making them leave early.

"So you can see he's starting to isolate her from her friends because now he's becoming a liability in front of her friends.

"In an abusive relationship, she'll probably protect him and isolate herself from her friends to avoid these scenes."

Steenkamp expressed her bitter disappointment about how the day ended: "We are living in a double standard relationship where u can be mad about how I deal with stuff when u are very quick to act cold and offish when you're unhappy.

"Every five seconds I hear how you dated another chick. You really have dated a lot of people yet you get upset when I mention ONE funny story with a long-term boyfriend."

Carr said this illustrated that Pistorius believed he had a right "to act out" when he was unhappy, but Steenkamp had "to behave and be perfect all the time".

"She starts to justify that she's not a slut, while he rubs it in her face all the time that he is sought after. You can see the power thing here."

Carr likened her remark, "I do everything to make u happy", to that of an abused woman who is constantly monitoring her own behaviour.

"She was trying not to press his buttons. You can see she's fundamentally not safe in the relationship."

He said the fact that she left the engagement party of Pistorius's former friend, Darren Fresco, early showed "he obviously didn't give a hoot about her needs, her feelings and what was important to her. It shows his self-centredness."

Carr said Steenkamp's message revealed a picture of an abused woman "trying to placate and reassure the abuser".

On the other hand, he said, Pistorius's response to her message, which starts off with "I want to talk to you; I want to sort this out" showed that he "totally minimises his behaviour".

"He's a narcissist, in my opinion. He's got a fantasy relationship in his mind and he says the right things according to his fantasy of how he wants the relationship to be. And, of course, that's what she wants to hear, so she buys into that. But you can see what's really going on in the relationship.

"His response shows he has no empathy for her. He justifies his behaviour - he doesn't take her seriously. He makes a weak promise about what a wonderful relationship they want to have," said Carr.

Carr suggested that the reason Pistorius behaved the way he did could be because he was perhaps shamed as a child.

"The mere fact that he has this disability would have caused him shame.

"I know he lost his mother when he was young and I have understood he didn't have a great relationship with his father," said Carr.

Fighting and loving: Messages between Oscar and Reeva

Steenkamp: There are a lot of things that could make us feel like shit.

Steenkamp: I won't always think before I say something, just appreciate I'm not a liar.

Pistorius: I know, it was just when you got back from Tropica [a reality TV show filmed in Jamaica in which Steenkamp took part] you made it seem like you smoked weed once. I don't know if you took other things.

Steenkamp: I'm sorry if it upset you, it wasn't my intention.

Pistorius: I do appreciate it, I could never be with someone who was [a liar].

Steenkamp: Today was one of my best friends' engagements and I wanted to stay longer. I was enjoying myself but it's over now. You have picked on me incessantly since you got back from CT [Cape Town] and I understand that you are sick but it's nasty. I was not flirting with anyone today. I feel sick that u suggested that and that u made a scene at the table and made us leave early. I'm terribly disappointed in how the day ended and how u left me. We are living in a double-standard relationship where u can be mad about how I deal with stuff when u are very quick to act cold and offish when you're unhappy. Every 5 seconds I hear how u dated another chick ... yet you get upset if I tell ONE funny story with a long-term boyfriend. I do everything to make u happy and to not say anything to rock the boat with u. You do everything to throw tantrums in front of people ... I can't get that day back. I'm scared of u sometimes and how u snap at me and of how u will react to me. You make me happy 90% of the time and I think we are amazing together but I am not some other bitch you may know trying to kill your vibe. I am the girl who let go with u even when I was scared out of my mind to. I'm the girl who fell in love with u and wanted to tell u this weekend. But I'm also the girl that gets side stepped when you are in a shit mood when I feel you think u have me, so why try anymore. I get snapped at and told my accents and voices are annoying. I touch your neck to show u I care, you tell me to stop. Stop chewing gum. Do this, don't do that. Your impression of something innocent blown out of proportion ... f***** up a special day for me. I'm sorry if you truly felt I was hitting on my friend Sam's husband and I'm sorry that u think that little of me. From the outside I think it looks like we are a struggle and maybe that's what we are. I just want to love and be loved. Be happy and make someone SO happy. Maybe we can't do that for each other. Cos right now I know u aren't happy and I am certainly very unhappy and sad.

Pistorius: I want to talk to you, I want to sort this out. I don't want to have anything less than amazing for you and I'm sorry for the things I say without thinking and for taking offence to some of your actions. The fact that I'm tired and sick isn't an excuse. I was upset that you just left me after we got food to go talk to a guy and I was standing right behind you watching you touch his arm and ignore me ... when I left you just kept on chatting to him when clearly I was upset ... When we left I was starving. The only food I'd had was a tiny wrap and everyone was leaving for lunch. I'm sorry I wanted to go but I was hungry and upset, and although you knew, it wasn't like you came to chat to me when I left the table. I was upset when I left you cause I thought you were coming to me. I'm sorry I asked you to stop tapping my neck yesterday. I know you were just trying to show me love ... I had a mad headache and should've just spoken to you softly. I'm sorry for asking you not to put on an accent last night.

Steenkamp: I like to believe that I make u proud when I attend these kinds of functions with u. I present myself well and can converse with others whilst u are off busy chatting to fans/friends. I also knew people there tonight, and whilst u were having one or 2 pics taken I was saying goodbye to people in my industry ... I completely understood your desperation to leave and thought I would be helping u by getting to the exit before u because I can't rush in the heels I was wearing. I thought it would make a difference in us getting out without u being harassed. I didn't think you would criticise me for doing that, especially not so loudly so that others could hear. I might ... be all tomboyish at times but I regard myself as a lady and I didn't feel like one tonight after the way u treated me when we left. I'm a person too and I appreciate that u invited me out tonight and I realise that u get harassed but I am trying my best to make u happy and I feel as tho u sometimes never are, no matter the effort I put in. I can't be attacked by outsiders for dating u AND be attacked by you, the one person I deserve protection from.

Steenkamp: You are a very special person. U deserve to be looked after.

Pistorius: Will you please let me know you safe.

Steenkamp: If u want to go chill with M, that's OK angel.

Pistorius: No, I want to chill with you. I miss you.

Steenkamp: I miss you too.

Pistorius: I miss you 1 more than you always.