Hollande gives mother of his kids a top job 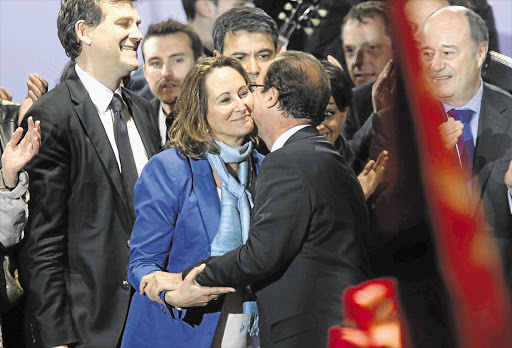 Ségoléne Royal, François Hollande's former partner and mother of his four children, has been given the number two ministerial post in his new "government of combat".

Royal, 60, whom Nicolas Sarkozy defeated in the 2007 presidential elections, was put in charge of the ministry of environment, sustainable development and energy.

The job makes her the most senior member of the Hollande government after Laurent Fabius, who retains the foreign affairs portfolio, and Manuel Valls, 51, the new prime minister Hollande appointed after the Socialist Party suffered an historic thrashing in local elections on Sunday that saw big gains for the centre and the right.

It marks a spectacular comeback for Royal and a sign of political rapprochement with her former partner about whom she disparagingly asked three years ago: "Can people name a single thing he has achieved in 30 years in politics?"

Relations with Hollande, 59, are now said to be good - she has supported most of his government's decisions.

But there was reportedly no question of her entering the government while the president was still living with Valérie Trierweiler. The pair split up after revelations over Hollande's affair with Julie Gayet, an actress.

With 16 ministers, not including the prime minister, this is the leanest cabinet in modern French history.