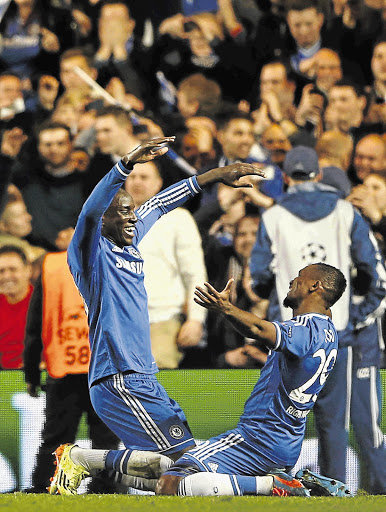 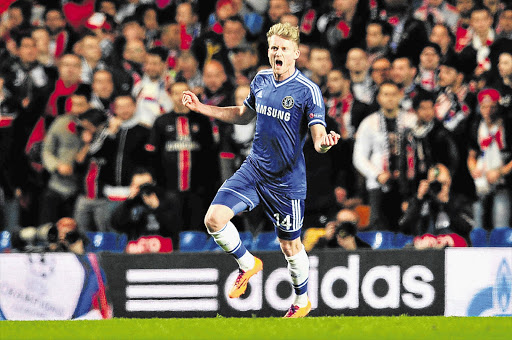 Chelsea substitute Demba Ba struck a dramatic late goal to seal a 2-0 home victory over Paris St Germain and a place in the Champions League semifinals on the away-goals rule last night.

PSG were heading for a first appearance in the last four since 1995 when Ba bundled in a loose ball after 87 minutes to clinch the tie, which ended 3-3 on aggregate.

Chelsea went ahead in a tense end-to-end battle at Stamford Bridge with a superbly-taken goal from substitute Andre Schuerrle after 32 minutes. They also hit the bar twice in two minutes early in the second half.

PSG, who won the first leg 3-1, dominated early on and Edinson Cavani missed two good chances in the closing stages of the game, which added to the almost unbearable tension on the night.

Chelsea, despite losing playmaker Eden Hazard to injury after 17 minutes when Schuerrle came on, finished strongly and were worthy winners on another memorable European night in west London.

Having been beaten 3-0 in the first leg on Wednesday last week in Madrid, Dortmund ultimately gave themselves too much to do.

But their coach Jurgen Klopp delivered on his pre-match promise that his side would bow out with an improved performance.

Cristiano Ronaldo was on the Madrid bench because of a niggling knee injury, so Angel Di Maria stepped up into the visitors' attack.

But the Argentine had an early penalty saved before Dortmund's Marco Reus netted two goals in an electric opening 45 minutes.

At the other end, Henrikh Mkhitaryan fired wide with the goal at his mercy after good work from Robert Lewandowski and Reus on the left wing.

But Reus was not to be denied when he pounced on Pepe's mistimed header back to his own goalkeeper, rounded Real's goalie Iker Casillas and slotted into the empty net on 24 minutes.

Reus grabbed his second after more sloppy defending when he snapped up Asier Illarramendi's poor back-pass and fed Lewandowski. When the Poland star hit the post, Reus tapped home the rebound on 37 minutes to make it 2-0 at the break.

Gareth Bale fired wide with nearly an hour gone, while only desperate defending denied Karim Benzema with the goal at his mercy after he had rounded Weidenfeller.

Mkhitaryan then squandered a great chance to make it 3-0, and level the scores on aggregate, when he hit the post having rounded Casillas on 65 minutes. He blasted a shot straight at the goalkeeper moments later.