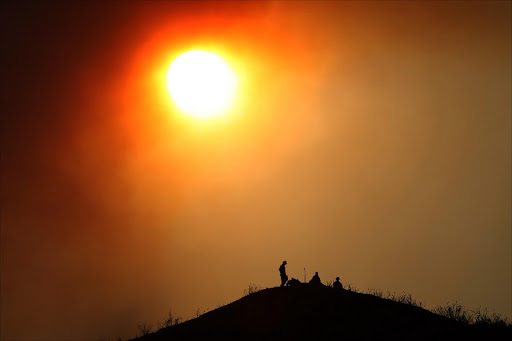 In what it dubs "Plan B", the UN's Intergovernmental Panel on Climate Change has looked at the possibility of sucking carbon dioxide out of the air and reflecting sunlight into space.

But some activists believe "geoengineering" should not be attempted as it could be ineffective, possibly harmful and delay the shift away from fossil fuels .

Some of the more wacky ideas put forward to mitigate global warming include moon mining and capturing an asteroid.

In 2012 scientists at the University of Strathclyde suggested capturing an asteroid and dragging it to the Langrange Point - halfway between Earth and the moon - where it would create a stream of dust surrounding Earth and blocking out the sun. Using the 1036 Ganymed asteroid would create a cloud 2600km wide.

However, they admitted that a miscalculation could cause the asteroid to hit Earth, which would end life on the planet.

Another proposal is to mine on the moon and throw up a cloud of dust for decades, which could protect the Earth from solar radiation.

Other scientists have suggested a giant space parasol; a huge sunshade or shield of mirrors between Earth and the sun to control the energy reaching our planet.

Dumping piles of iron filings in the sea to "seed" infertile areas of the ocean is known to create plankton "blooms" which take up thousands of tons of carbon dioxide.

After observing that volcanoes cool the planet by spewing sulphates into the atmosphere, scientists began carrying out experiments to see if they could be created artificially.

But critics claim the technique could lead to environmental damage, causing droughts and depleting ozone.