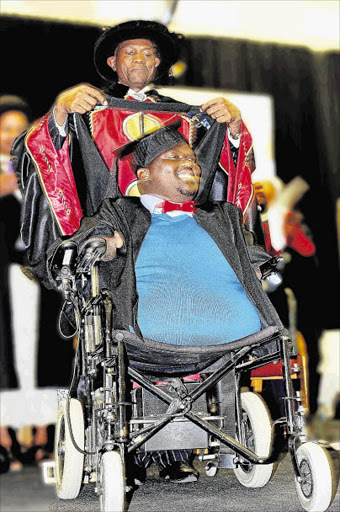 Walter Sisulu University (WSU) student Bulelani Kobe proved that everything is possible when he completed a diploma last year – without the use of arms or legs.

Kobe’s diploma was conferred at the institution’s Butterworth campus on Monday.

The office management and technology graduate said although he had been born without arms or legs he was able to do everything an able bodied person can do, including writing and typing.

After completing his primary education at a school for children with disabilities in Mthatha, Kobe, 30, moved to Vukuhambe Special School in Mdantsane.

He completed his high school education at Philadelphia School for the physically challenged in Pretoria where he received his matric in 2005.

“I tried to get into university after that but I didn’t get in because of my condition. Most universities didn’t have the facilities to cater for me,” Kobe said.

“After that I met an official from the education department in Butterworth who tried to assist me get into a university. He applied almost everywhere, using his own money, but all the applications came back saying the same thing.”

A despondent Kobe said he was finally accepted at WSU in 2009. While ecstatic to have been accepted, Kobe said his biggest challenge had been transport.