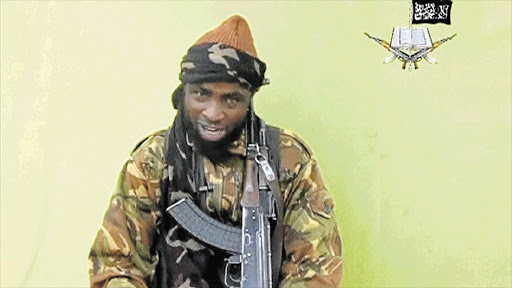 Abubakar Shekau's cackling laughter and rambling manner give him more of the air of a psychopath than a militant. By comparison, the late Osama bin Laden came across as almost measured.

But, as Nigeria has learned the hard way in the past five years, his terrifying on-screen persona is no act. Shekau is considered Boko Haram's 's most ruthless commander by far and has played a key role in taking it down the path of all-out war on the rest of Nigeria.

Though it is the kidnapping of the schoolgirls that has earned him world notoriety, his group is believed to have murdered up to 5000 people in the past five years, many of them innocent villagers.

Born in northeast Nigeria and believed to be about 40, Shekau is a member of the Kanuri ethnic group, which is spread throughout central Africa and which, in the early Middle Ages, was among the first in the region to embrace Islam.

Today a minority of militant Kanuri is said to make up the bulk of Boko Haram's followers. Though the group originally pursued largely local grievances, under Shekau it has adopted much of al-Qaeda's ideology.

He took over after the 2009 capture and killing by the Nigerian army of Ahmed Yusuf, Boko Haram's founder, and has since stopped all dialogue with the Nigerian government. Moderate commanders who have argued with him have often been killed. Indeed, a Boko Haram affiliate, Ansuru, which has kidnapped foreigners and published videos of their execution online, cut ties with Shekau because it found him too difficult to deal with.

"He is crazy," said one intermediary. "He really believes it is okay to kill anyone who disagrees with him."

Nonetheless, his tactical skills have earned him a large following of fighters, and he also has contacts with al-Qaeda groups in Mali, which sheltered him in the city of Gao after he was injured when the Nigerian army attempted to capture him.

In late 2012 he declared his group's allegiance to al-Qaeda, expressing admiration for Abu Musab al-Zarqawi, the Jordanian jihadist who beheaded kidnapped Briton Ken Bigley in Iraq in 2004.

Shekau has shown similar bloodthirstiness, saying in one video: "I enjoy killing anyone that God commands me to kill - the same way that I enjoy killing chickens and rams."