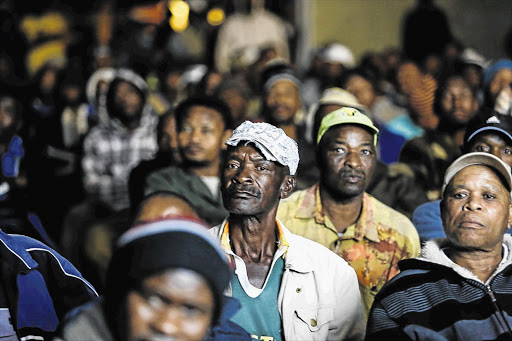 Seated in a room with hundreds of striking miners, I sense their disgust when they hear police commissioner Riah Phiyega commend her troops for killing 34 unarmed miners in Marikana, in the North West, on August 16 2012.

In the darkness of the recreational hall, their disgust rises like a noxious plume as footage is shown of former union hero Cyril Ramaphosa calling them ''dastardly criminals".

We are watching Miners Shot Down, a documentary by Rehad Desai.

The trip to the hostel at Impala Platinum mine, in the North West, where the film was screened, was like travelling through JRR Tolkien's Mordor, all black earth and belching smokestacks.

Miners Shot Down chronicles the massacre, beginning six days before the event, using a combination of interviews and news footage.

It asks many harrowing questions, among them: who gave the order to use deadly force and why; if the police did not intend to kill anyone, why were four mortuary vans and 4000 rounds of live ammunition delivered to them on the day of the massacre?

In one of the film's most horrifying moments, police officers swear at the corpse of one miner and drag others around like carrion. Amid the carnage, an injured miner sways as he tries to sit up; around him, the bodies of colleagues and friends, and the indifference of the police.

In the hall, the miners were not watching a movie about terrible things happening to other people.

It was their story and what they saw was a supposedly democratic government collude with the mining houses to use police oppression.

Said one miner who asked not to be named: "It broke my heart to watch this film. This was the same thing the Boers used to do to us, and now our brothers are helping them ."

After the screening, there were tears and prayers. Tomorrow they would continue their strike, one that has gone on for months.

Each day costs them for they receive no wages.

Miners Shot Down shines a sharp light on the massacre. It is a story that must not be buried, or forgotten.