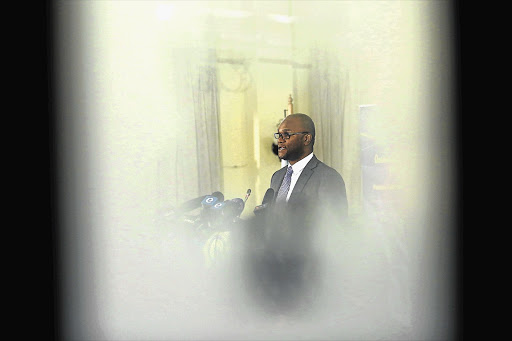 ENHANCING THE SOUL: Arts and Culture Minister Nathi Mthethwa says he will prioritise he establishment of a Heroes' Acre that will pay tribute to people involved in the liberation struggle
Image: MOELETSI MABE

New Arts and Culture Minister Nathi Mthethwa has warned that he is not a fan of "derogatory" art.

The former police minister is adamant that his redeployment is not a demotion. But analysts have labelled Mthethwa "one of the biggest losers" in the new cabinet.

A number of critics believe his new portfolio is a tacit rebuke for his handling of the police service, which endured a string of scandals under his stewardship, including the Marikana massacre and multiple instances of police brutality

Mthethwa is having none of it.

"[To] people who say that [the arts and culture portfolio] is a junior department, I would emphasise that I don't see anything more senior than a department that is trying to lead a nation to its own identity," Mthethwa said.

"You can also be very practical about it and say: 'Look at the people who have been previously deployed by the ANC [in this role]'.

"They are senior people, including my predecessor, Paul Mashatile. Nobody is junior."

The new minister is not alone in objecting to the likening of his ministry and department to a political gulag.

The Arterial Network SA, an association of artists and activists, said: "The perception of so many political analysts, commentators and politicians that this ministry is the lowest rung in the cabinet needs to be changed."

To diminish the arts and culture portfolio in this way, the group said, is to insult the constitutionally enshrined position of the department as the custodian of South Africa's heritage.

"The area I am deployed in is very important," he said.

"It is one aspect of our life which has not been given the necessary importance and significance.

"Here we are talking about the culture of a nation, and we have not yet succeeded in developing our culture."

One of the heritage aspects on which Mthethwa looks likely to place the most significance is memorialising the liberation struggle from colonial times onwards.

"If you look at how people express themselves about the Anglo-Boer War, what is left out is how Africans suffered. Nobody highlights that," Mthethwa said.

"It is about correcting the wrong ideology, which looked at South Africa from a colonisers' point of view, to say: 'There was [an experience of the colonised] too'."

Mthethwa said he would prioritise establishing a Heroes' Acre memorial, paying tribute to leading figures in the colonial wars of resistance and the liberation struggle.

Countries all over the world have similar public tributes to "characterise the soul of that country", Mthethwa said.

He cited the Arc de Triomphe, in Paris, as an example.

"That's the kind of thing I am thinking of, and I still have to go through workshopping and so on, but I am convinced it's a necessary thing."

He added: "I am excited about my responsibilities."

Members of the arts world have expressed uncertainty about Mthethwa's suitability for the role, given his lack of experience.

"I'm not sure where they're going to get the knowledge of the sector if the minister, deputy minister and director-general all bring little experience [to the table]," Blackman said.

But Mthethwa said he is a patron of the arts in his private capacity.

Mthethwa is a big fan of traditional African music, and says that SAFM's African Connection programme "enhances my soul every Saturday". He is also a jazz aficionado.

Mthethwa would not name the South African painters or sculptors he admired.

The question has to be asked: Would the new arts and culture minister support the right of a private gallery to exhibit a painting like Brett Murray's The Spear?

"What is The Spear?" Mthethwa responded.

Reminded about the biggest arts controversy to jolt South Africa in recent years, he chuckled.

"I would like to see artists being sensitive to individuals' views and individuals' privacies [sic]," Mthethwa said.

"I wouldn't like derogatory kinds of artists and art. That's my view.

"[I wouldn't like] anything which is seen as derogatory, which is not aiming at our journey."