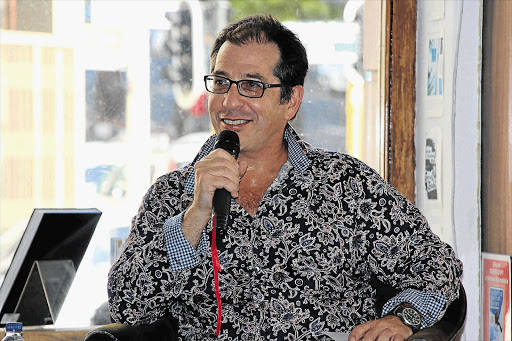 With 21 books and thousands of cartoons under his belt, Zapiro has seen his fair share of trouble.

This is why he says a recent cartoon depicting South African voters as clowns and "poephols" was a "big mistake". The cartoon appeared on the Eye Witness News website.

Zapiro was speaking ahead of last night's launch of his new book, Democrazy, South Africa's 20 Year Trip. "I really empathise with the cartoonists [Dr Jack and Curtis]. I know them both and I think they made a big mistake," he said.

"I went through it myself. I stand behind all four of the cartoons that Jacob Zuma tried to sue me for, but there was a different Zuma cartoon I had to apologise for.

"I was rushing to go overseas and needed something to publish. I used a cartoon I'd done for a party that went down really well, but in print it went down badly," he said.

"I think the EWN cartoonists made a big error in the way they depicted the voters, what they called them and the shadow in the bottom corner, which could be misconstrued as meaning black voters.

"They should have - and the editors of EWN should have - picked it up. But, they have apologised and anything that goes beyond that now is just bandwaggoning by politicians."

Zapiro's new book is a collection of his cartoons from the past 20 years. For the book, he has again collaborated with writer Mike Wills, who worked on Vuvuzela Nation, a book of sports comics.

Zapiro - real name Jonathan Shapiro - said he had included "some wacky unexpected cartoons about how strange and interesting this place [South Africa] is".