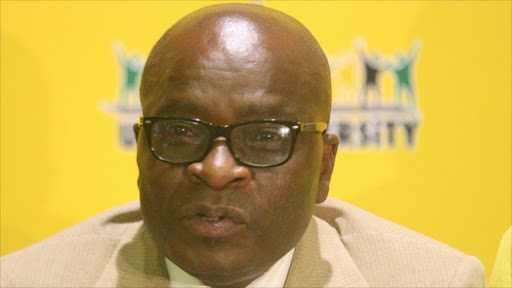 The ANC says that the Association of MineWorkers and Construction Union is a pawn of "white foreign interests" whose secret intention is to destabilise the economy.

Amcu is the union whose platinum miner members have been on strike for close to six months, causing serious damage to the national economy and bringing extreme hardship on themselves and their families.

The strike has cost the employers R21.2-billion in revenue and employees have reportedly lost R9.4-billion in earnings.

The ruling party's national executive committee yesterday warned newly appointed Mineral Resources Minister Ngoako Ramatlhodi to handle "the facilitation [of resolving the dispute] with care", saying that the state and Ramatlhodi were in danger of inheriting a poisoned chalice.

"There were questions about the role of the state in workplace disputes, where there are clear rules guiding it," ANC secretary-general Gwede Mantashe said at the end of the party's national executive committee meeting yesterday.

After an energetic start in his new job, Ramatlhodi is today expected to end with a whimper his involvement in attempts to resolve the five-month wage impasse .

If he does, he will leave behind a situation as chaotic and tense as he found it two weeks ago when he boldly launched himself into the fray, minutes after he was sworn into office.

Then, Ramatlhodi's pledge to adopt a hands-on approach was widely welcomed and it was hoped that the government's direct intervention would result in a settlement.

The ANC yesterday, however, raised concerns that the strike had taken on an international and political dimension - and that its true intention was to destabilise the economy.

"Of concern was whether this was a collective bargaining strike or a political strike," the party said.

The ANC also expressed concern that Julius Malema's Economic Freedom Fighters had been allowed to take part in wage negotiations, saying this was further evidence that Amcu's intentions were not genuine.

The EFF hit back last night, justifying its support for the strike.

"The silly attempt by the ANC to antagonise and shift blame for their failure to resolve the ongoing platinum strike to the EFF is further borne of their failed attempts to pressure workers to submit to the interests of white capital through a dishonest mediation by the Ministry of Mineral Resources," it said.

Platinum mining house Lonmin yesterday said it would not increase its offer to the 70000 striking Amcu members.

Its executive vice-president for public affairs, Lerato Molebatsi, said the company did not have the money to meet the miners' demands.

"There is no more money but there is a willingness [on Lonmin's part] to see where we can chop and change and look into allowances," said Molebatsi.

"We have shown [Amcu] the numbers. and the reality is, no matter how many times we have tried to accommodate their demands, they have simply dug in their heels."

Molebatsi said the sticking point was the R12500 entry-level salary.

Mining houses have said that they will be able to offer a R12500 entry-level salary by July 2017, but Amcu wants it now.

Amcu treasurer Jimmy Gama did not respond to requests for comment.

At the weekend, Ramatlhodi threatened to pull out of the negotiations if Amcu and the mining houses had not agreed to a settlement by today.