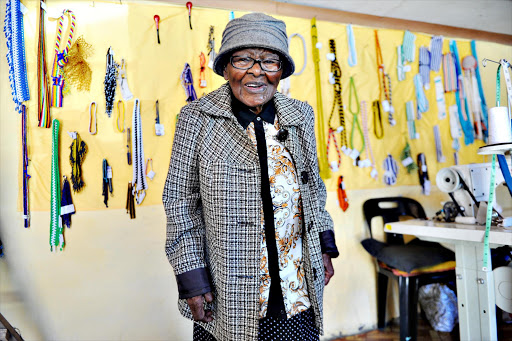 The reality of the death of struggle stalwart Epainette Nomaka Mbeki sank in yesterday when her son and former president, Thabo Mbeki, arrived in East London with his wife, Zanele.

Mbeki, who had been expected to rush to Ngcingwane, his mother's village near Dutywa, in Eastern Cape, spent yesterday in East London instead.

MaMbeki, 98, was admitted to an East London hospital two weeks ago for observation after experiencing breathing problems.

It is understood that the Mbeki family was settling funeral arrangements in East London to avoid repeated journeys between the city and Ngcingwane.

Residents of the village said that Ngcingwane would not be the same without "Gogo", as MaMbeki was called in the village.

Those who knew her described her as a community builder and philanthropist. She was the recipient of many awards, including the Community Builder of the Year award and the King Cetshwayo African Image award.

Nokwakha Gulwa, 63, who had been MaMbeki' s neighbour and knew her from the 1970s, said: "A nyone could go to her home for advice and would leave that home a changed person.

"When days were dark and there was nothing at home - be it groceries, school uniform or fees, or funds for a funeral we ran to her home and we would definitely get help from her.

"She always refused to be paid for the assistance she offered. She gave with all her heart. She would not stand on top of a mountain and shout that she had helped someone.

"Despite her pint-size body, her heart to help the poor and fight for their rights was as big as a giant's."

Gulwa said that even when Mbeki was president Gogo remained humble: "She never regarded herself as the mother of a president but as one of the women of the community.

"She was among the people attending and contributing in community meetings, farmers' meetings, and rural women's meetings," said Gulwa.

Nocingile Mbombo, 88, said MaMbeki had been like a sister to her.

"When I was sick she would ask her people to drive her car and take me to a doctor and pay all the costs herself. But she always refused to be paid back."

MaMbeki was an active member of the Dutywa village farmers' association and was particularly involved with maize planting.

Said Gulwa: "Every Monday at 8am she attended the farmers' meeting. It is only in the past two weeks that she did not attend."

Mbeki said on his Facebook page that the funeral will be held in Ngcingwane on June 14, starting at 9am.

Presidential spokesman Mac Maharaj could not confirm whether President Jacob Zuma would attend, saying: "The president is resting at the moment; he's undergoing [medical] tests. I do not have any information at the moment."