By ©The Sunday Telegraph 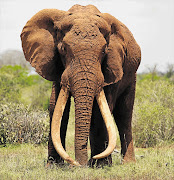 Image: RICHARD MOLLER/TSAVO TRUST DYING BREED: Satao, one of Kenya's best recognised elephants, was killed by poachers at the weekend in a remote corner of Tsavo East National Park

One of Africa's last "great tuskers" - elephants with tusks weighing more than 45kg - has been poisoned by poachers in Kenya.

The bull, named Satao, and likely to have been born in the late 1960s, succumbed to wounds from poison darts in a remote corner of Tsavo National Park, where he had migrated to find fresh water after recent storms.

At the weekend his carcass lay with its face and great tusks hacked off, four legs splayed where he fell.

Conservationists told how Satao moved from bush to bush, keeping his ivory hidden among the foliage. "I'm convinced he did that to hide his tusks from humans; he had an awareness that they were a danger to him," said wildlife filmmaker Mark Deeble.

Satao's killing is the latest in a surge of elephant poaching across Africa, said Richard Moller of the Tsavo Trust, who had been monitoring Satao for several months.

"There is no doubt that he was killed by a poacher's arrow to feed the insatiable demand for ivory in far-off countries. A great life lost so that someone far away can have a trinket on their mantelpiece."

Demand for ivory in Asian nations has seen poaching reach levels that were last seen in the 1980s before the ivory trade was banned.

The street value of elephant ivory is now greater than gold, running to tens of thousands of dollars per tusk. Organised criminals are running increasingly sophisticated poaching gangs and networks.

More than 20000 African elephants were slaughtered last year, according to the Convention on International Trade in Endangered Species of Wild Fauna and Flora.

Earlier this year, the renowned conservationist Richard Leakey described poaching in Kenya as a "national disaster" .

A group of friends on a bachelor party made an unlikely discovery while out walking on a beach in New Mexico, US - a perfectly preserved 3million-year-old elephant skull.

The party was hiking in Elephant Butte Lake State Park, near Albuquerque, when they spotted what looked like a bone emerging from the sand. The friends began digging until the skull surfaced.

They thought they had found a woolly mammoth and sent photographs to the New Mexico Museum of Natural History and Science. They were not too far off.

The skull, the most complete of its kind ever found, belonged to a stegomastodon - a prehistoric ancestor of elephants.

Mastodons migrated to North America about 15million years ago and became extinct about 10000 years ago.

They are a much older species than the woolly mammoth, which dates back only to the Ice Age.

The 454kg skull belonged to an animal about 2.7m tall that weighed more than 6t.