Heyneke to bring in young bucks 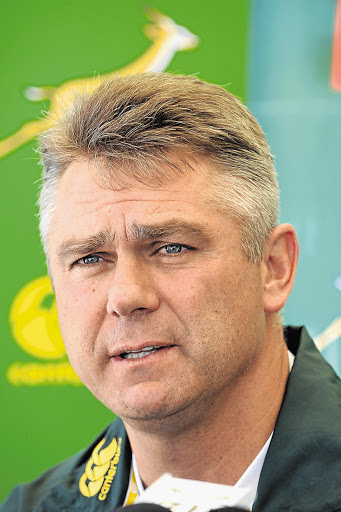 A younger Springbok side is expected to take on Scotland in Port Elizabeth on Saturday.

Due to injuries and many players bound to overseas club commitments , coach Heyneke Meyer looks set to announce a side laden with young guns in the Boks' last June match .

Beast Mtawarira and Flip van der Merwe will be unavailable due to a neck and knee injury respectively, while flanker Willem Alberts needs to pass a head injury assessment after suffering a concussion in the Boks' 31-30 victory over Wales in Nelspruit.

The Boks, who will press on with one more Test match while New Zealand and Australian sides resume Super 15 activities this weekend, lost a total of seven players from their overseas contingent.

Bok defensive coach John McFarland said: "It's sad to see them go because they contributed a lot. But now it's good to see that some of the younger guys will get a chance as well."

Mtawarira and Van der Merwe have been replaced by the Sharks duo of Lourens Adriaanse and Stephan Lewies.

Team doctor Craig Roberts also announced that Marnitz Boshoff, who has made a full recovery from an ankle injury, and Johan Goosen, subject to a late fitness test on his knee, could both be available.

But the greatest focus will be on whether 20-year-old flyhalf Handré Pollard will get to play against the Scots.

McFarland was not overly concerned about the team's defence, even though many felt it was below par last weekend.

In fact, McFarland was complimentary in terms of the big picture. "We have been pretty good in our last six Tests, conceding only six tries. Obviously Saturday was not ideal," he said.

"If you look at the last 15 minutes, it was a real heroic performance.

"The guys are really excited that they can win the match in so many different ways at the moment.

"At the end of the day we came through and won the game in the 78th minute."

Cricket: Second Test, final day, England vs Sri Lanka at noon on SS6; Inside Edge at 8pm on SS6