The Big Read: Love in a time of Mandela 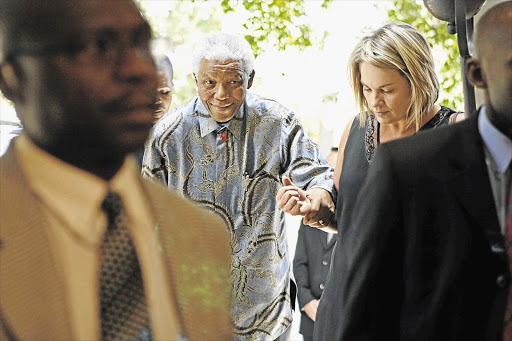 I like Zelda la Grange's simple, funny, humorous, painful and unpretentious book about her relationship with Nelson Mandela.

When you come across yet another work featuring the great man, you look for something new, a deeper insight into his unique humanity and a sense of what lay behind his political strategy. There is plenty on which to feast.

A purist will complain about the shaky grammar, the factual errors (Albert Luthuli was not founding president of the ANC) and the sometimes superficial character sketches. You have to wonder whether the editors of this famous publishing house were taking a collective nap. But it is precisely La Grange's simple writing-from-the-heart that draws you into the story of Mandela's secretary, who breaks into tears when the president greets her warmly in Afrikaans on their first meeting.

Here is a crucial insight. Mandela's choice of La Grange as his first lady was a brilliant political move, yet this was a position that would subject her to constant whisperings and sometimes outright attacks throughout her 19 years with Madiba. She was white and Afrikaans, "a real boermeisie", the travelling president tells the Emperor of Japan when he introduces her; I can only imagine what went through the mind of Akihito on hearing this strange word. Nothing would communicate more powerfully Mandela's quest for reconciliation than having the blonde white woman in public view of a divided country and a captivated world.

This book could also be read as a story about the transformation of La Grange, a white woman from a conservative Afrikaans family who admits that by age 13 she was a racist who readily imbibed the apartheid narrative of dangerous terrorists and godless communists out to destroy white civilisation.

As a result of an intimate and evolving relationship with Mandela, this naive young woman comes to see through the fabric of lies and distortions that continue to trap many white South Africans inside the dangerous logic of white supremacy. To change, she needed to come close to the black experience, but she also needed to experience black leadership of the moral authority and example of a Mandela.

What gradually repels her in this new understanding of humanity is the racism of her people, such as the sickening bigotry of Rozanne Visagie, PW Botha's daughter, who has the temerity to shake her finger (where did she learn this behaviour?) and scream in the face of a nation's president she disrespectfully, by Afrikaans cultural standards, calls "Mandela".

Racism and aggression is learnt, and in the beautiful story of the president's right-hand woman, it can also be unlearnt.

One condition for unlearning bad behaviour is that significant adults in the lives of young people speak with one voice condemning what is wrong and committing to what is right.

You will not find this kind of unanimity about what is wrong among some prominent Afrikaans leaders and youth organisations, aided and abetted by the Afrikaans media, whose ethnic reflex is to assume victimhood. That kind of response is read by white youth as condoning bad behaviour, and that is bad for young people to whom we should be looking for leadership in a non-racial and just society.

What also changes La Grange is the kind of black experience to which she is exposed. Mandela accepts her as a human being with all the frailties of her broken past. He loves her, in fact, as the book reveals in several tender moments when there is nobody around Madiba but his young assistant.

One of the reasons white Afrikaans speakers in particular react so badly to the triple threat that marks every front page of an Afrikaans daily (farm murders, rugby quotas and the alleged demise of the Afrikaans language) is the lack of generosity among the victors of this post-apartheid society. If you were a vulnerable young white person reared on a diet of threatening black people, the ugly displays of black behaviour in parliament will confirm your worst fears - let alone the promised threat of taking away 50% of white commercial farm land.

South Africa needs millions of La Granges among our white youth. But it also needs many more Mandelas among our black leaders, current and future, who lead with the understanding that deciding between reconciliation and social justice is a false choice. We need both, and only ingenious and generous leadership can deliver on the example of Madiba.