'Road of Excess' leads to sutures 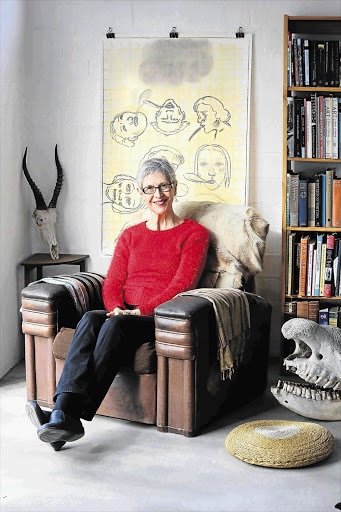 PORTRAIT OF THE ARTIST: Ingrid Winterbach in one frame

Ingrid Winterbach's The Road of Excess is about keeping it together.

This is the story of two brothers, Aaron and Stefaans Adendorff, the first an artist drawn to apocalyptic themes, the second facing daily emotional torsion. Following the death of his second wife, Aaron is plagued not only by a cancerous growth on one of his three kidneys and marginalisation by his gallerist, his life is further unsettled by the arrival of an anarchic neighbour, Bubbles. No defence against the onslaught of the world, its capacity to undermine us from inside and out, seems to hold.

Now on an "intimate footing with death", his paintings materialise his mourning and melancholia. They are dark, intensely worked horizons, holes and rolling severed heads. At the same time, though, they increasingly draw inspiration from the comics of his childhood, particularly The Katzenjammer Kids.

Aaron keeps proving more courageous and adventurous than we expect. He forces the world into the lines, patterns and textures of his painting, playing in and with the darkness.

Stefaans' life is dislocated. His energies express themselves in unruly SMS outbursts and occasional long letters to Aaron, punctuated by silences - usually periods of catatonia, depression and substance dependence. He is in constant free-fall, surviving only miraculously.

The brothers, in one of Stefaans' periods of loquacity, remember their family; slowly they pick over the detritus of their shared past. Stefaans uses shards of memory to develop a mad, visionary mythology to account for his alienation. This makes the novel sound dreary. It is not at all.

Her depiction of the art institution in South Africa (Winterbach is herself a visual artist), with all of its rivalries, anxieties and fashions, is ludic, accurate and laughable. The facile new kids on the block are lining up, "enriched" with theory and digital technology, to edge out the modernists.

This is as compelling as the novel's "ekphrasis". The term, perfect for dinner-table pretension, refers to the translation of one art form into another. Winterbach's descriptions of Aaron's paintings are mesmerising, drawing us into the inner world of the artist as few writers have been able to do.

Of course, writing about an artist draws an author into reflection on her fiction. We begin to look for parallels between Aaron's works, his life and The Road of Excess itself. We discern an author engaged - not only in self-examination - but concerned with the capacity of creativity to conjoin irreconcilable aspects of our lives.

There is nothing seamless in the conjunction of the apocalyptic landscapes and cartoon heads. The seams have to show in our patchwork memories and clumsily sutured relationships.

The thing is that - at least now and then and more or less - we can keep discontinuities together, in the same frame and in productively unsettling combination.

In Winterbach's novels, life is not all tortured humility in the face of our history of harm - there are always Katzenjammer Kids hiding behind the most profound questions. It is difficult not to be entranced by her aesthetic.

The Road of Excess is an important addition to the list of Winterbach's translated works. She has received every Afrikaans literary accolade - some often - and is doubtless one of our most important novelists.