Vicious Cycle: It's not a bike, it's da bomb 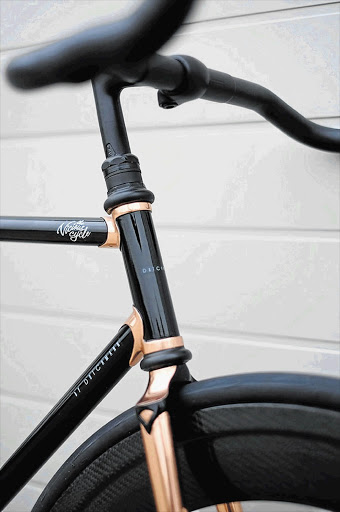 GEARING UP: The Vicious Cycle, created by the Dutchmann guild

Attention is switching to bicycles as the Brazil World Cup comes to an end and sports fans look towards the Tour de France to get their next fix.

The Vicious Cycle, a one-of-a-kind bicycle, is so beautiful it looks like an art piece, mixing the old and the new.

The bicycle - with its unique tri-spoke wheels and copper and black paint - was made by the Dutchmann guild, a network of South African craftsmen.

Gavin Rooke, Rooke Gallery owner and founder of the guild, said: ''The guild started three years ago during an art project to make surfboards."

After exhibitions around Johannesburg, the guild expanded and its members not only make surfboards, but also restore and sell Porsches and collaborate on specialised craft projects.

Rooke said the guild aims ''to raise the profile of South African craftsmen".

Fast forward to 2014 and the Dutchmann guild has create a bicycle so cool you almost don't want to risk riding it.

Rooke said the Vicious Cycle celebrated "the high level of craftsmanship in South Africa". He brought renowned bicycle frame builder Duncan MacIntyre out of retirement for the project.

MacIntyre restored the bicycle's original frame, which he had built by hand for South African cyclist Malcom Cochrane for the Track World Championships in the mid-1980s.

Said Rooke: ''I tracked down Duncan to build new frames, but discovered it would be too expensive to build them."

They decided to restore an existing frame and enlisted composite specialist Anton Dekker to custom-make the wheels.

Dekker used state-of-the-art carbon fibre composites to make the cycle's tri-spoke wheels. The wheels were so popular that the Dutchmann guild is producing them for buyers in the US and the East.

''The bicycle is a unique product. It's not a classic because it is contemporary, but it is on an old frame," added Rooke.

Rooke said because of the expense of building a brand new frame, the Vicious Cycle is only available on request.

''We will effectively do the same thing again on existing frames, but only 10 times," he said.

So far there's been a great demand for the Vicious Cycle, mainly from people who want it as an art piece. The finishing touch on the bicycle is its logo, designed by creative director and designer Gustav Greffrath.

The logo references the bicycle's classic look, giving it a beautiful, sleek and retro finish.

Priced at R47500, the first Vicious Cycle has already been sold.

While it does not come cheap, it might be the perfect purchase or gift for those who love to collect objets d' art that are both beautiful and unique.