Doing it better second time around 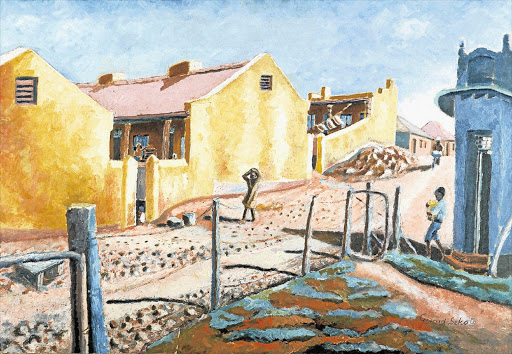 EARLY WORK: 'Yellow Houses, A Street in Sophiatown' was bought by the Johannesburg Art Gallery, a first for a municipal gallery in apartheid South Africa

South Africa recently began its second round of restitution when President Zuma signed the Restitution of Land Rights Amendment Act.

My recently released book, We Want What's Ours: Learning from South Africa's Land Restitution Programme (Oxford University Press), is based on interviews with 150 ordinary South Africans forcibly removed from urban areas during apartheid. The book reveals that only about 80000 individuals and communities had filed claims by the1998 deadline because of poor publicity, misinformation, procrastination and disbelief that the post-apartheid state had the ability to deliver compensation.

Mrs Mercy, a former resident of Marabastad (a community in Pretoria's CBD), was among those interviewed. She filed a claim by the 1998 deadline but regretted that most of her former neighbours were excluded from their torn community's moment of mending. She said: "I feel people were cheated out of it . instead of going up, we are going down. We are not improving."

With the new amendment to the act, Mercy's neighbours and the millions of others initially left out will finally have their constitutional right to restitution.

The ANC must learn from the mistakes made in round one to ensure that round two restores property and dignity to dispossessed populations.

We Want What's Ours uses a bottom-up approach to explore the ways in which the Land Restitution Commission succeeded and failed at providing restitution. There were three main findings.

First, although claimants were supposed to have the ability to challenge all the commission's decisions in the Land Claims Court, poverty kept the court out of their reach. As a result, the Land Restitution Commission had overwhelming power because it acted as a prosecutor by defending the interests of the state, a defence attorney by guiding claimants through the process, and like a judge in deciding whether each claim succeeded or failed.

In round two, the power asymmetry between commission officials and claimants must be addressed by adding an independent review board.

Second, the study found that good communication between commission officials and claimants is essential. Without it, claimants often felt as if they did not have any say in the process. The story of Mrs Khumalo, a pension-aged African woman, speaks volumes. Khumalo was among those the apartheid government brutally evicted from Sophiatown.

We Want What's Ours shows that the Land Restitution Commission did not give most claimants a true voice in determining their compensation. As Khumalo said: "We had no choice; we were just given money. Some of the people wanted their land in Sophiatown. [it was] like bottle-feeding a child: take, drink and that's it."

Many of those interviewed for the book were frustrated by the commission's failure to treat them like full citizens who deserved to have a say in how things transpired. When asked how not having real input made her feel, Khumalo said: "Terrible, but what else could I do? ... apartheid hasn't ended; it's still there but in a subtle way."

In contrast, when communication went well, claimants felt respected and heard, and treated as full and equal citizens. In round two, the commission must focus not only on producing outcomes but also on creating a process in which people feel heard and respected.

Third, most blacks dispossessed by prior regimes received financial awards that had no relation to the market value of the property rights lost. But current property owners (mostly white) receive fair market value when their land is expropriated.

In round two of restitution, the ANC must increase the financial awards.

And the commission must pay close attention to how the process unfolds or it might inadvertently salt the wounds it was meant to heal.