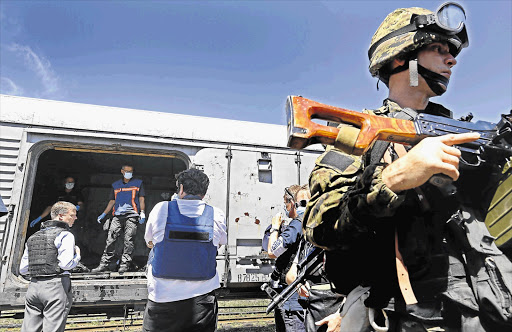 A train carrying the remains of most of the victims of the crash of Malaysia Airlines flight MH17, shot down over Ukraine last week, left the site yesterday after Malaysian Prime Minister Najib Razak reached a deal with pro-Russian separatists controlling the area.

The aircraft's black boxes, which could hold information about the crash, would be given to the Malaysian authorities, Razak said, indicating he had bypassed Kiev, which has lost control of much of the east.

At the UN, the Security Council unanimously adopted a resolution demanding those responsible "be held to account and that all states cooperate fully with efforts to establish accountability".

The expected handover of the bodies and the black boxes, and reports by international investigators of improved access to the wreckage of the airliner four days after it was shot down, takes place against calls for broader sanctions against Russia for its support for the rebellion, though Western leaders are struggling to agree on a united response.

Razak said he had reached an agreement with the separatists for recovered bodies to be handed over to the authorities in the Netherlands, where the largest number of victims came from.

Dutch Prime Minister Mark Rutte said a train carrying 200 body bags was on its way to rebel-held Donetsk and then to Kharkiv, which is in Ukrainian government hands, from where the bodies would be taken back to the Netherlands.

At the same time, emotions ran high in the Netherlands, where prosecutors opened a war crimes investigation.

Shaken by the deaths of 298 people from across the globe, Western governments have threatened Russia with stiffer penalties for what they say is its backing of pro-Russian militia who, their evidence suggests, shot the plane down.

But, with Russia challenging them to produce proof, some of those taking a firmer line are saying the acid test will be if the separatists improve access to the site and Russia stops supporting them.

"Now's the time for President [Vladimir] Putin and Russia to pivot away from the strategy that they've been taking and get serious about trying to resolve hostilities within Ukraine," he said.