Watch: PE pupil bullied by classmates while teacher does nothing 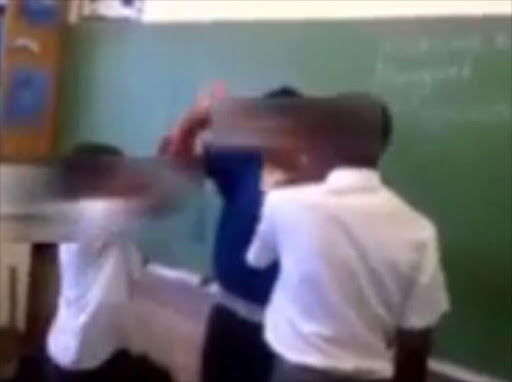 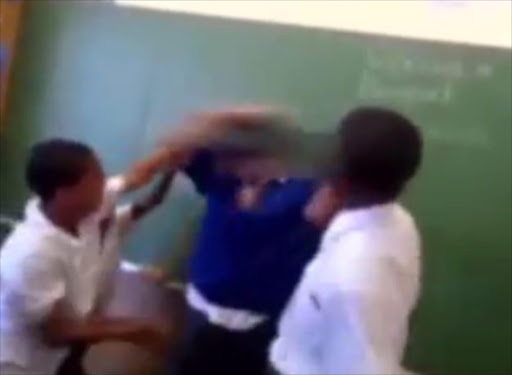 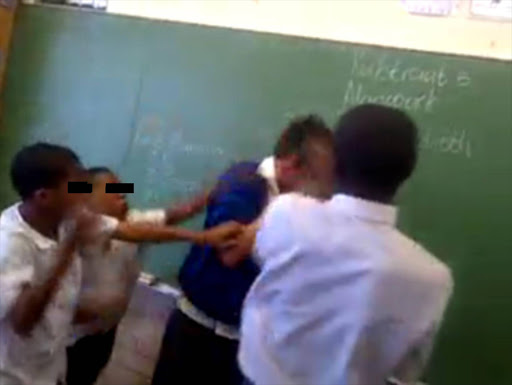 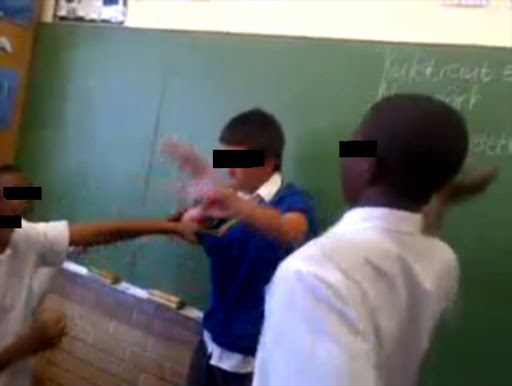 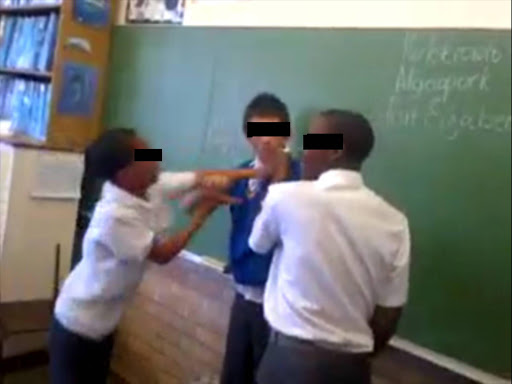 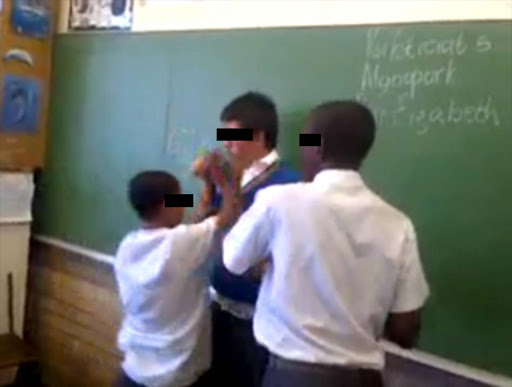 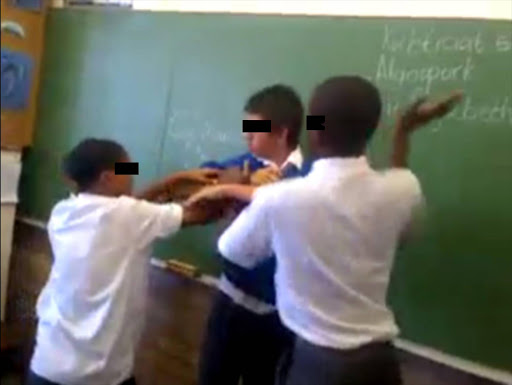 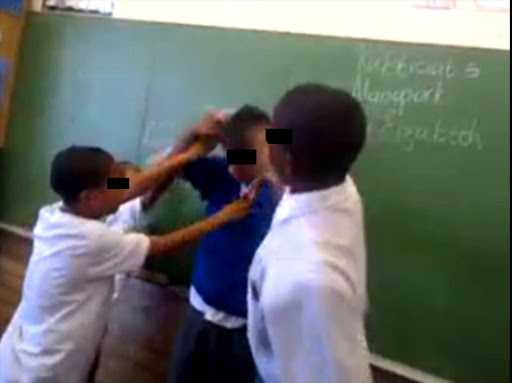 Bullying and violence in schools have come under the spotlight again after a video, taken in a classroom at Port Elizabeth’s Otto du Plessis High School in Algoa Park, shows a Grade 8 boy being manhandled and beaten by a group of classmates.

Throughout the relentless attack on Anton du Toit, 14, a teacher sitting at her desk in the class makes no attempt to intervene.

The video, recorded by another pupil on a cellphone, shows Anton backed up against the blackboard in the front of the class while three other boys shove him into the wall, tug at his jersey, and repeatedly slap and punch him in the face and head.

The clip, which was filmed in March, was brought to The Herald’s attention yesterday by Anton’s shocked mother, Anitia du Toit, 49, who saw it for the first time this week.

“Anton told me what had happened, but only now, seeing it for the first time, do I realise how serious the situation was,” Du Toit said.

She said she was aware a video had circulated among pupils at the time, but was told by the school it was deleted shortly after the incident.

“This has to be exposed so parents and teachers from other schools take notice. Many other kids go through far worse torture than my son had to endure, and I hope seeing this video will prompt people to act against it.”

Recalling the incident, a soft-spoken Anton said last night that the same group of classmates came after him several times that day.

“The fight in the video was the first of three times on that one day that they gave me trouble. After that class they came to me again during recess, and then again later that day before we went home.

“Those guys threatened to come after me again, so I asked some friends to walk home with me after school. Luckily they didn’t show up again.”

For the duration of the 30-second video no one – including the teacher – makes any effort to stop the attack. Instead, several pupils are seen holding up cellphones to record the incident, and loud laughter and encouragement can be heard.

“Slap him! Slap him!” one child is heard yelling.

The video does not show how the fight started, but begins where Anton is pushed and hit by two boys – one bigger than him and the other much smaller. A third boy, also smaller, then joins in and hits Anton. The bigger boy eventually stands aside, watching how the smaller boys repeatedly hit their victim.

At one stage Anton is seen asking his attackers why they are hurting him. When he does attempt a swing at one of the smaller boys their much larger friend steps in, and again slaps Anton with visible force.

A female teacher is seen near the end of the video sitting behind her desk, and a boy can be heard yelling at the “juffrou” to wait so the assault can continue.

Otto du Plessis principal Tinus van Eeden yesterday confirmed the incident and said disciplinary steps were taken afterwards. He said one of the boys, the bigger one shown in the video, had been temporarily suspended on several occasions.

“The boy’s parents have been called to the school on more than one occasion, and this fight was just one on a list of transgressions that earned him a temporary suspension earlier this year.

Although the boy is currently also suspended, he is still in Anton’s class when attending school. There has however not been any further incidents between Anton and the group of boys.

Van Eeden said the boy, 15, was assessed and should actually be in a school for pupils with special needs, but no special schools in Port Elizabeth had space for him, and the worst punishment the school could apply was a temporary suspension.

Regarding the teacher’s failure to intervene, the principal defended her actions, saying teachers had to be very careful when intervening as the pupils could easily have accused her of assault if she had become physically involved. He said she followed protocol by notifying the head of the Grade 8 classes, who then handled the matter further.

Du Toit said she did not blame the school for what happened to her son, but felt the public should be made aware of how children were being bullied at schools.

“I went to see the principal who assured me the matter had been dealt with. He explained that the boy was suspended, but would have to return to Anton’s class afterwards. I was not happy with the arrangement, but I understand the school can only do so much. It’s probably factors from outside school that causes that boy to act the way he does.”

Van Eeden acknowledged the video was a prime example of bullying – one of the biggest problems in schools today.

Education department spokesman Loyiso Pulumani said the school was following all the correct disciplinary channels, and any applications to have the alleged instigator permanently expelled should be directed to the regional head of department.

“In the meantime the department has instituted wellness programmes with officials visiting certain schools to advise them on possible action against troublesome pupils. Otto du Plessis was among schools visited earlier this year.

“But, while the school has an obligation towards that pupil, and cannot expel him, the school also has to keep the wellbeing of other pupils in mind. An incorrigible pupil cannot be tolerated if he is a threat to others’ education and safety.”

Clinical psychologist Judith Ancer said bullies were shaped by many factors that stemmed from their home lives, and many times their aggression could be traced back to their parents.

“Aggressive and punitive parents who have little emotional involvement with their children are factors that could lead to a child becoming a bully.

“On the other hand, kids who are too vested in their own status – kids who are part of the ‘cool’ crowd – can also turn into bullies as an attempt to keep their ‘A-crowd’ status.”

Ancer said the parents of children who repeatedly targeted by bullies should seek help for the youngsters.

“They are often afraid of further bullying, afraid of standing out and drawing attention, or scared of the damage their actions will cause to them or their bullies.

“We have to teach kids to step in when others are being bullied,” Ancer added. “By not stopping a bully you are in fact condoning his actions, and when a fight is encouraged it will cause the bully to act out even more.”

Chief executive for the National Professional Teachers’ Organisation of South Africa (Naptosa) Paul Duminy said bullying was “unfortunately part of our schools” and teachers struggled to find ways of combating and preventing the practice .

“Two major problems are that teachers struggle to spot the signs and when they to identify it they are unsure how to address the issue. If teachers could receive some form of formal instruction it could go a long way to helping our pupils.”

Branding the issue of discipline an “incredibly sensitive subject”, representative for the South African Teachers’ Union (Satu) Ted Townsend said teachers were concerned some pupils could turn around and accuse them of abuse if they intervened when bullying or fighting took place.

“Our union is having a symposium this weekend, dealing with various aspects of violence within our schools, and bullying will be one of the talking points.”

This story first appeared on HeraldLIVE