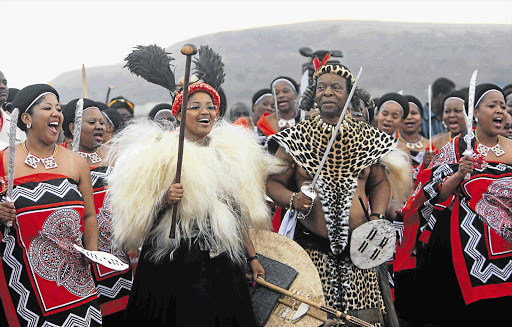 The king, 66, married his sixth wife, Queen Zola Mafu, 28, in a colourful traditional ceremony during which Zulu warriors danced and those present sang.

More than 10000 people, including traditional leaders and VIP guests, descended on the former KwaZulu homeland capital, which had been a hive of activity since Friday in anticipation of the royal nuptials.

International guests and the who's who of South Africa joined the celebrations, including President Jacob Zuma.

Swaziland's King Mswati III was invited but did not attend.

Durban business tycoon Vivian Reddy and ANC stalwart Winnie Madikizela-Mandela were also in attendance, having arrived from Durban on a chartered flight.

More than 60 cows and scores of sheep were slaughtered for the wedding.

The Zulu monarch was chauffeured to the venue in black Mercedes Benz that arrived at the Ulundi Regional Sports Complex in the company of Zulu warriors in traditional regalia.

Mafu soon followed in a Rolls-Royce Phantom that belongs to Reddy and arrived with a Swazi delegation.

She had crossed the border from Swaziland on Friday night and spent the night in a specially prepared hut.

She woke at 5.30am yesterday and proceeded to a stream under a tree where she bathed and dressed for the occasion before travelling with her entourage to the wedding venue.

Mafu, a Swazi commoner, is the sixth and youngest child of Rose Tfobhi Mafu and her late husband, Agrippa Fanyana Mafu. Zwelithini paid lobolo of 20 cattle - nine more than were required - eight years ago.

Mafu was selected to be Zwelithini's bride when she took part in the 2003 Swazi reed dance.

She was 18 at the time and a pupil at the prestigious St Mark's High School in Mbabane, Swaziland.

She was picked out by Zwelithini's third wife, Queen Mantfombi, who is the daughter of the late Swazi king Sobhuza II and sister to Swaziland's absolute monarch, Mswati.

Mafu has been sharing a palace with Mantfombi, but now that she has married Zwelithini she will stay at the newly refurbished Ondini palace.

The original Ondini palace, the capital of King Cetshwayo, was razed by British forces on July 4 1879, an event that marked the end of the Zulu kingdom.

Today, the wedding will enter its second day with the umabo ceremony, when gifts are exchanged between the groom and bride's families.

Later this evening, the king will hold a reception to celebrate his wedding and his birthday, which was on July 14.