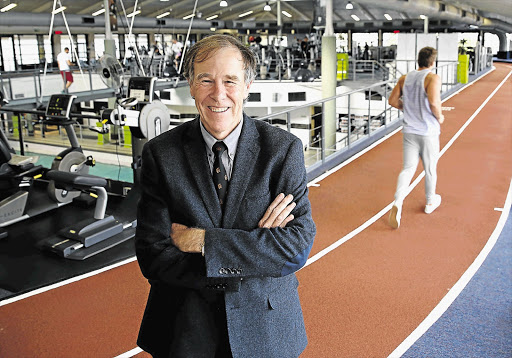 The visibly distressed doctor took on Noakes at the Vitality Summit in Sandton on Friday.

Noakes started the discussion - titled The Big Fat Debate - by presenting his views that many people were carbohydrate-intolerant. He said the body's inability to deal with a diet high in carbohydrates led to obesity and increased the risk of heart attacks.

Dalby asked why Real Meal Revolution, the bestselling book by Noakes and three others, carried the disclaimer: "The authors cannot be held responsible or liable for the decisions and actions which readers undertake as a result of reading this content."

Noakes maintained that too much insulin secreted in response to a high carbohydrate diet was to blame for heart problems rather than the commonly held view that high cholesterol and a diet high in animal fat were to blame.

He quoted a new study from the University of Alabama, in the US - to be published in the journal Nutrition later this month - which showed it was "obvious" diabetics should avoid carbohydrates.

But an irritated Dalby said two of his patients had, on Noakes's advice, stopped their cholesterol-lowering statin medication - and their cholesterol levels had shot up sharply as a result, one dangerously high.

Noakes told The Times yesterday that new research showed that too much insulin in the body caused metabolic conditions, which resulted in diabetes and heart disease, and which Dalby's diet promoted.

''So the question is: which diet is criminal? It comes down to which model is correct.

"The cholesterol theory for heart disease has never been proved. The insulin theory looks plausible," he said.

Heart and Stroke Foundation CEO Dr Vash Mungal-Singh said the raging debate about how much carbohydrates and saturated fats people should consume was confusing, yet Noakes and his opponents agreed on a lot of things.

"We're [all] saying eat less. We agree on the need to avoid sugar, processed foods and refined carbohydrates. We need to have more whole foods," Mungal-Singh said.

Sugar, salt and refined carbohydrates - which are made from white flour - are what is killing people.

She warned that following Noakes's high-fat diet to lose weight, but cheating with the odd carbohydrate or a glass of wine, was like ''putting a gun to your head".

The diet needed to be followed properly, she said.

Noakes agreed: ''It's all or nothing."

Noakes's high-fat diet or eating plan, also known as the Banting diet, is for people who are diabetic or overweight. It promotes eating saturated fats, avoiding all sugar and reducing carbohydrates to about 50g a day.

Named after London undertaker William Banting, the diet was prescribed by a Harley Street surgeon in 1861 with considerable success. Noakes's book has sold more than 100000 copies.