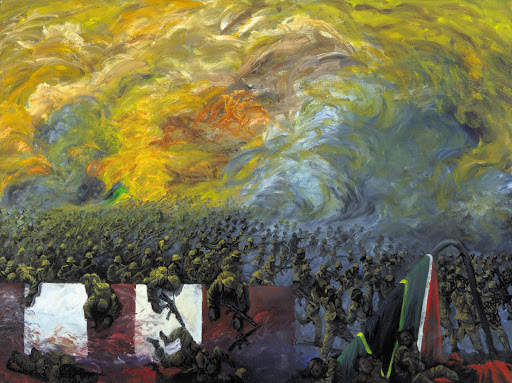 DEPTH OF FIELD: 'Closer to the Rainbow' by Ndikhumbule Ngqinambi

"Painting lives on; it persists because it matters - fundamentally," says Alastair Whitton, curator of PAINT MATTERS, at Barnard Gallery in Cape Town.

PAINT MATTERS celebrates a resurgence of the medium in South Africa, showcasing work by both emerging and established artists such as Alexia Vogel, Asha Zero, Khaya Witbooi and Ndikhumbule Ngqinambi.

"The death knell of painting has been sounded again and again, ever since the invention of photography, and yet painting seems to have been endowed with what has come to be known as the 'Lazarus Effect'. It just keeps coming back," says Virginia MacKenny, associate professor in painting at the University of Cape Town's Michaelis School of Fine Art.

She believes the vibrancy of the medium can be attributed to the need for contemporary painters "to reinvent the medium in order to maintain its relevance".

MacKenny acknowledges the "superb shows" in recent years of established artists such as Penny Siopis and Johannes Phokela, and praises mid-career artists such as Sanell Aggenbach and Deborah Poynton for "managing to re-engage and reinvigorate a kind of photorealism in a manner which is technically very competent, but also thought-provoking".

She is also excited about new- generation artists who are "showing a surprising maturity very quickly" - including Georgina Gratrix and Ian Grose.

"Then there are others who seem to be exploring painting in different ways - Jo Voysey who produces work using medicine as paint, Lauren Palte who is working on copper plate and Jeannette Unite who works in pigments found on the mines," MacKenny says.

"Painting remains relevant today because it continues to question itself and its conventions," says Emma Vandermerwe of Everard Read. An artist epitomising this, she says, is the abstract painter Zander Blom, who "is conscious of his connection to the art historical traditions of painting, but challenges the gaps and disconnections separating him from this, leading him to constantly question painting as a medium, a practice and its limits with a stunning, emotionally charged depth".

Michael Stevenson, founder of Stevenson, which represents Blom, says the awarding of the international 2014 Prix Jean-François Prat to the artist "was an amazing affirmation" because it recognised his skill, not his location or identity.

Stevenson believes South African art has only recently begun to transcend its fixation with identity politics. "We're so narrative-driven in this country because everyone has a story," he says. "There's a visual literacy in the last few years that has rapidly grown in South Africa."

MacKenny believes we are seeing "not merely a way of exploring the formal elements [such as colour, surface and form], but [also] a deeply interpretative and engaged response to difficult philosophical questions and concerns".