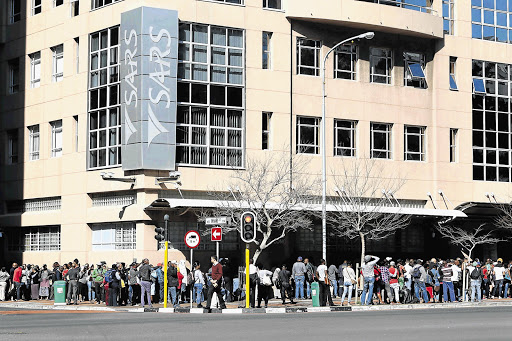 Van Loggerenberg's romantic relationship with Belinda Walter, a Pretoria-based tobacco lawyer, has ended "acrimoniously" and the sensational accusations emerging in the fallout appear to have sparked inquiries from the Hawks crime-fighting unit, state intelligence and the police.

Walter, who used to head the Fair-Trade Independent Tobacco Association - which represented smaller tobacco firms that have frequently had skirmishes with the tax authorities - has laid complaints against Van Loggerenberg with the police and SARS.

The airing of this dirty linen will be an unwelcome distraction for the tax service, which is battling to restore its credibility after its boss, Oupa Magashule, quit under a cloud last year after offering a job to an associate of convicted drug dealer Timmy Marimuthu.

With accusations piling up fast from both sides, the romantic saga also threatens to open a Pandora's box of dirty tricks used to prop up and protect players in the lucrative tobacco industry.

In letters between the two obtained by the Sunday Times from Walter, she levels a host of sensational allegations against Van Loggerenberg, most serious of which is that he allegedly revealed confidential taxpayer details to her - a crime under the Tax Act.

The relationship itself represented a potential conflict of interest because Walter represented tobacco companies including Carnilinx - a company run by Julius Malema supporter Adriano Mazzotti - who was being pursued for tax dodging by Van Loggerenberg.

Walter's claims are supported by what appear to be transcripts of WhatsApp text messages between her and Van Loggerenberg - again obtained by the Sunday Times from Walter - in which the pair appear to discuss at length a number of investigations headed by him.

SARS has set up a panel to probe Walter's allegations and presumably to assess whether any of Van Loggerenberg's investigations have been compromised.

The agency has, however, downplayed the substance of the allegations.

Van Loggerenberg's lawyers, Dokrat, wrote a letter to Walter saying: "Our client accepts that he may have exchanged information with you concerning his work, which he believed not unusual in a normal relationship of trust such as what he believed existed between you."

In meetings with the Sunday Times this week, Van Loggerenberg - a former apartheid undercover police agent - said Walter's complaint was part of an extensive campaign to discredit him, driven by people who would benefit from him being sidelined at the tax authority.

"Although her initial intention may have been simply a case of trying to hurt me when I ended the relationship, her so-called complaint very soon became an instrument of a number of people with nefarious agendas," he said.

He said the text messages that Walter provided to prove that he was breaking the rules were incomplete and out of context and had been selectively edited to present a damning picture.

"On the other hand, I have the complete record of all our interactions in forensic form," he said - copies of which had been handed to authorities, including SARS.

Van Loggerenberg said there was a network of rogue agents in the police and intelligence services seeking to topple him.

"I am currently in the process of suing [Walter] and other individuals who used this complaint to try to discredit me and who presented and published severely defamatory statements about me and other [people], some of a very private nature," said Van Loggerenberg.

In e-mails earlier this year to the Sunday Times, asking it not to publish details of his private life, Van Loggerenberg said: "One cannot predict that one will fall in love or not. In this case I did. I consider this to be intensely private and I abhor being forced to explain this to anybody because of others' and the Sunday Times's conduct."

Van Loggerenberg maintained then that his relationship with Walter was born out of natural human attraction and genuine caring, that the relationship had been fully disclosed to SARS and that the couple had discussed a potential conflict of interest. He insisted that he had worked at all times to ensure the relationship did not compromise his role at SARS.

SARS said it believed that Walter's complaints "lack substance" and were part of an "attack" on the tax authority - driven by key players in the highly lucrative world of illicit tobacco smuggling.

In a letter sent to all tobacco companies in November, SARS issued a stern warning to companies it said were using devious smear tactics to sideline specific individuals seeking to bring them to book.

Lackay said Walter at first did not provide details, then withdrew the complaint when pressed - something she denies.

"If [she] and connected individuals, who are peddling the same allegations to the media, would instead present SARS with credible information, SARS would treat the allegations seriously," he said.

"SARS is aware of many attempts to tarnish the integrity of SARS officials involved in investigations ... some of these practices were carried out with the collusion of members of the media, the legal fraternity and former and current state officials, wittingly and unwittingly."

The saga threatens to blow the lid on far deeper networks of misinformation and dirty dealings that have been established to prop up and protect one of South Africa's largest criminal industries.

Van Loggerenberg said he believed that once all the evidence had come out - evidence that has been given to the Hawks, the National Prosecuting Authority, SARS and the intelligence services - "I have all faith that [a campaign to discredit SARS and himself] will come out in the open".

These are some of the intimate WhatsApp messages exchanged between Johann van Loggerenberg, South Africa's top tax law enforcer, and Pretoria-based lawyer Belinda Walter before their affair ended in bitter recriminations that have rocked SARS. The sensational claims emerging in the fallout appear to have sparked inquiries from the Hawks crime-fighting unit, state intelligence and police.

9:46:00pm: Belinda Walter: Why do you send me messages that make me worry so much about you and then neither answer me when I respond, not take my calls

10:08:24pm: Belinda Walter: I was worried you committed suicide. And all the while ... You think I'm that stupid

10:09:52 pm: Johann vL: I don't want to talk now. I just arrived at home. I am busy with a matter that is weighing heavily on me and which you wont understand.

10:11:09pm: Belinda Walter: I don't believe your rubbish any longer. Give me that whole sad story about how pointless your life is and then this shit

10:16:08pm: Belinda Walter: And for the record - I have not missed you. I have enjoyed being happy and being me again. I am not this dark cloud here that is you. I am liked, treated with respect and kindness by strangers. It's the exact opposite of how you treat me. I believe that attorneys do not meet clandestinely at 10pm. Were you trying to sidle into Siobhan or some other employee's good books again?

10:18:42 pm: Johann vL: Actually no. I met with him because they are trying to settle before the weekend because his sequestration hearing is on Monday. And he was in Cape Town today for swearing in of MPs and only landed late tonight in Jhb. Im glad you are honest for once though. Now please stop. Im busy.

7:55:12am: Belinda Walter: I really do not believe your story last night. I don't understand why all the lies? If Malema has an attorney and SARS is represented by nelia etc. Why would you meet directly with attorney at all hours of the night? It's unethical and improper

7:59:58am: Johann vL: Please leave me alone. I am not interested in what you have to say and I have nothing to say to you. I am busy.

8:08:58am: Johann vL: And since I am asking nicely please don't form opinions or views of the ethics and propriety of what I do at work when you know nothing about it. The same goes for rumour-mongering about me and any other person associated with me. Keep it to yourself or among those who have nothing better to do but make up bullshit stories. I couldn't care less about nonsense cooked up by people who have their own agendas.

8:30:33am: Belinda Walter: There is no rumour mongering. You flatter yourself. I cannot and have no intention of controlling what people say about you - particularly your ex-friends/girlfriends. I don't have the time or energy for that. Don't attack me because I told you what decent people said with no agendas and not even knowing I know you. You may wish to try having the same alleged integrity in your personal life instead of putting someone who loves you on a roller coaster and lying to me. I know you thing you are a Demi-god but I am also busy. I haven't slept for 2 nights.

9:30:21pm: Belinda Walter: I heard the radio on Julius apologising and admitting

9:31:02pm: Belinda Walter: It also made him look decent - sadly as repentant and wanting to follow rule of law

9:31:31pm: Belinda Walter: Yes. Those people should look at their own tax affairs and stealing our money for fire pools, etc.

In the interests of all citizens, we tell this story

In February, a series of e-mail entreaties arrived at the Sunday Times. They were from Belinda Walter and Johann van Loggerenberg, respectively, asking that their romantic relationship be respected and kept out of the public domain.

In his letter, Van Loggerenberg spoke of his burgeoning relationship with Walter, saying that in showing an interest in his private life, we would make something "tender appear sleazy".

At the same time, Walter placed pressure on our journalist, Malcolm Rees, demanding that we return documents that she had willingly given to us.

Now, five months later, the relationship has come to an end, but it is clear from the accompanying article that it holds broader implications for Van Loggerenberg, and for SARS as a whole. Not only is he embroiled in a legal tussle with Walter, but he insists that she now forms part of a broader conspiracy to oust him from SARS.

This is no rare coincidence - that people who are the subject of articles often attempt to persuade a journalist to ignore or kill a story.

But what was extraordinary was the response from Van Loggerenberg's employer.

Rees had sent questions to SARS spokesman Adrian Lackay, who had ignored them.

On Friday, I called and was told that "they" do not trust Rees and that they suspect him of being used by parties bent on destroying Van Loggerenberg. No proof of this was offered - just a repeated allegation.

If we published a story about him and Walter and the fallout that is currently playing out, then it would damage SARS's relationship with the Sunday Times, said Lackay.

In the course of doing their jobs, our journalists receive sensitive information - the higher the stakes, the more explosive the material. This is all too common not only at the Sunday Times, but at news organisations across the globe. There will always be individuals, driven by private and organisational interests, who peddle information.

We are constantly asked to weigh up the merits of this information and, if it is found wanting, we discard it.

Initially - and this is the reason we did not publish details of Van Loggerenberg's relationship with Walter - the affair was private. However, it can no longer be deemed such, as our lead story demonstrates.

Is this story in our readers' interests, given the significant space that SARS occupies in South Africa? Yes, it is.

This is why we publish the story today - not because we have been "played". - Phylicia Oppelt, editor