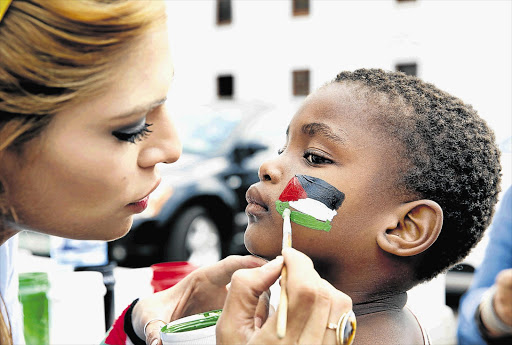 WORTHY CAUSE: Volunteer Nadia Motala paints the Palestinian flag on a child at the Minara Children's Hospital festival at Addington Beach in Durban yesterday. The festival was raising funds for a new children's hospital
Image: RAJESH JANTILAL

A Johannesburg Jewish schoolboy has caused an uproar by showing solidarity with Palestinians in Gaza.

Joshua Broomberg, deputy head boy of King David Victory Park, is being condemned for standing for "humanity and for the Palestinian people who do not have a state to protect themselves".

Broomberg, Wits student Saul Musker and his brother Sam Musker are members of the South African national debating team. Last week they posted a picture of themselves draped in keffiyehs, Palestinian scarves, "to show our opposition to the human rights violations carried out against the people of Palestine".

The three, who are all Jewish, are at the World Debating Championships in Thailand. Musker said the trio had been told to convert to Islam, and had also received threatening messages.

"These boys should be killed like the children in Sderot [Israel], they don't deserve to breathe!" read one of the messages.

Another message sent to them read: "To this [sic] f#### retards that support the Palestinians...Me ….. Poczynski born in Argentina and Soldier at The IDF ( Israeli Defense Force) i hope that these people does't [sic] ever come to my country (Israel) because i will shoot them with my M16 and empty all my bullet [sic] on them!"

Musker said: "We obviously don't take any of these seriously - they're just angry and silly".

He condemned the violent response: “The reaction to our post displays a worrying disregard for the dignity and freedom of expression that all people should enjoy.

“The vitriolic and bigoted comments and messages that we received were designed to threaten and intimidate, to stifle meaningful discourse, and to vent hatred and anger."

By last night more than 2000 people had signed a petition addressed to South African chief rabbi Warren Goldstein and the head of the SA Board of Jewish Education, rabbi Craig Kacev, accusing Broomberg of bringing his school "into disrepute". The petition asked that he be stripped of his position and honours.

In response to the petition, Kacev said though the King David schools "supported Israel's right to exist, teachers didn't operate as the thought police and suppress debate".

He said debate was part of education and the school did not "support a call for mock justice".

Broomberg wrote on Facebook: "Firstly, I would like to apologise. It was not intended to create the uproar it has... or offend or upset... It was not about politics. It was about humanity. We stand with the thousands of civilians who have lost their lives in the conflict."

A petition in support of the trio had garnered more than 2200 signatures by last night.

It read: “We commend your decision in your choice of Joshua Broomberg  as Deputy Head boy of King David High School. He shows true leadership and humanitarian qualities which are invaluable if we are to progress as a united human race.”

But Musker remains angry at the violence included in the responses: "The organised Jewish community is petrified of internal dissent, and goes to great lengths to ostracise and vilify those who speak out against any action of the Israeli government.”

"Any criticism is painted as anti-Zionist or even anti-Semitic, and there is no room for complexity or discussion. Many within the community subscribe to a deeply paranoid and self-destructive form of authoritarianism".

He urged people to engage in "meaningful discourse rather than resort to bigotry and violence".