Big Engine: The Cat and the mockingbird 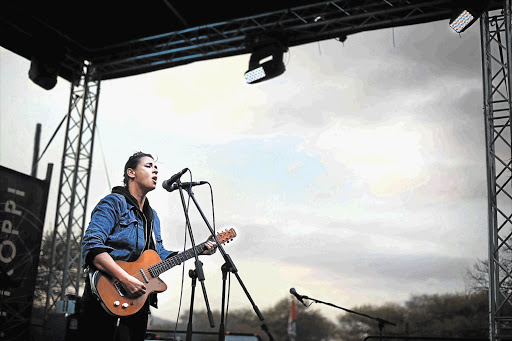 EMOTIONALLY INTENSE: US singer-songwriter Cat Power on the Bruilof Stage at the festival in Limpopo last week
Image: JOHN HOGG

Chan Marshall, known as Cat Power, was one of the international acts at the Oppikoppi music festival last week.

She burst onto the music scene in 1995, marking her territory as an emotionally intense, unique, soul-baring artist playing a heady mix of punk, folk, country, blues, soul and even electronica. Her most recent album, 2012's Sun, was critically praised and Rolling Stone magazine included it in its list of the 50 Best Albums of 2012.

I visited Cape Town in 1996 and I had a spiritual enlightening. Being back in Cape Town has been such a moving experience. There's a portal of energy there. Byron Bay is similar, Tulum in Mexico, too.

My dad and stepdad were in a band and my mom was a singer. Everyone in the post-Vietnam era in Atlanta who didn't go to war was in a band. It was the raw fabric of growing up.

I didn't know my parents until I was four years old. I lived with my gran and three siblings and it was wonderful. As soon as I started living with my mom, it was constant moving. There were always a ton of strangers in the house. I slept in drawers. There was often no food.

As a child I could sing like a hillbilly. I was a mockingbird. I could do anyone, including Michael Jackson. I stopped as I got older and wrote poem songs. I was very introverted and didn't sing out. The first time I ever saw people in the audience and could look at their faces, I began to sing differently and be true to myself.

I really wanted to be a painter but I had to work to earn money. I worked three jobs at a time in New York City. I was a nanny, worked in a store and was a cleaner, bartender and artist's assistant. I would do anything except take my clothes off - I'm not into exploitation.

The name Cat Power was a spur of the moment decision. Someone was wearing a hat that said Cat Diesel Power - they make engines for the railroad.

My big break was opening for Liz Phair. But I started low. I felt indebted to my friends who had died. I was so stupid when I signed my first contract, I didn't even get an advance.

I'd love to have collaborated with Miles Davis, Nina Simone and Bob Dylan.

At age 23, I left America for the first time and went to Paris to do a TV show for my third record. A girl told me she just got out of hospital after trying to commit suicide and that my record helped her. From that day on, I do every interview I can.

My biggest fear when performing is that my music won't reach who it needs to. I get stage fright.

Songwriting is cathartic. It's water and air. It's my past. It's autobiographical.