No signs of life after deadly collapse 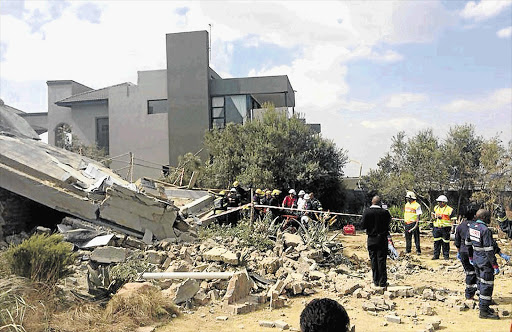 RUINED: Emergency and medical services personnel remove some of the bodies trapped under the rubble of a double-storey house in Meyersdal Eco Estate, south of Johannesburg, that collapsed yesterday morning. The death toll stood at seven last night
Image: EKURHULENI EMS

Rescue workers were last night unsure how many workers were still trapped under the rubble of a collapsed house in the upmarket Meyersdal Eco Estate, south of Johannesburg.

They were unable to contact one of the contractors to establish the number of employees working on the site.

Eight others were injured, two critically. Five are in a serious condition and one sustained minor injuries.

"The search will go on until we know how many people were on site," said Ekurhuleni EMS spokesman William Ntladi.

"One supervisor said his company had 24 workers. We can't find the other contractor," he said.

The house collapsed at about 10.30am yesterday.

Urban Rescue personnel and rescue technicians were searching for the dead and injured under the rubble and slabs of concrete using shoring equipment to stabilise the building.

A back-hoe was being used to remove rubble.

There was no sign of anyone alive, said Ntladi. Meyersdal Eco Estate has a nature reserve, with several species of antelope, and upmarket double-storey houses.

Andrew Boerner, a lawyer acting for the estate, said his client would cooperate with the investigation into the cause of the collapse.

The Department of Labour dispatched a team of investigators to the site and will issue a preliminary report on the cause of the accident.