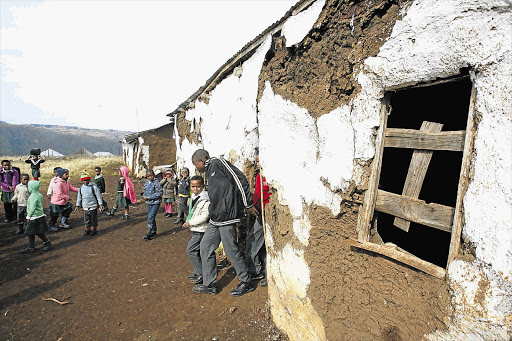 The mud school at Bomvini Senior Primary in Bomvini village in Libode has no windows and doors, and the walls are crumbling. Many children continue their schooling under such conditions despite repeated promises to provide them with proper school buildings
Image: LULAMILE FENI

The basic education and Eastern Cape education departments have to publish an updated list of public schools with inappropriate structures, the Eastern Cape High Court ruled on Thursday.

The list had to be published within 45 days of the order, on both the national and provincial education departments' websites.

It had to be accompanied by a comprehensive plan detailing what infrastructure every school on the list would receive, along with timeframes.

The Centre for Child Law and five schools took both departments to court to force them to identify all such schools in the province and to publish a rebuilding timetable.

All schools had to be given at least 30 days to explain to the basic education department why their schools should be categorised as "mud schools" or "inappropriate structures", in order to be included on the new list.

The provincial department had to publish the detailed criteria that would be used to assess schools' infrastructure. These criteria would be used to determine whether the schools needed to be replaced, renovated, given temporary classrooms, or closed.

The departments had to provide a report to the Centre for Child Law and the five schools detailing what progress had been made in finding the money to implement the comprehensive plan.

The five schools that approached the High Court would receive emergency relief, within 90 days of the order, in the form of safe and adequate structures, sufficient water, and adequate sanitation.