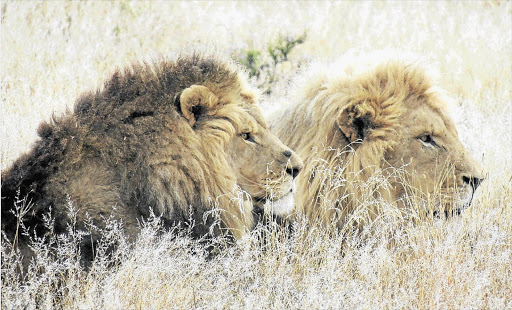 BORN FREE: The fact that lions can be hunted at a private game reserve outrages one of our readers
Image: TAM SAFARIS

When US television host Melissa Bachman, 30, posted a photo on Facebook of herself smiling above the head of a lion she had shot, the response was instant.

She was vilified as "evil," a "low-life" and a "disgusting excuse for a human being".

Her hunting trip was part of South Africa's game-ranching industry, which is worth R12-billion a year and growing at 10% a year, according to Barclays Africa Group.

The industry is also responsible for boosting South Africa's large mammal population, a measure that excludes animals such as rodents, to 24million, the most since the 19th century, and up from 575000 in the early 1960s, Wouter van Hoven, an emeritus professor at the University of Pretoria, said in an interview last month.

By contrast, animal numbers in Kenya have plunged 80% since it banned hunting in 1977.

"We're made out to be the bad guys," said Peter Oberem, 60, a veterinarian turned game rancher, as he pointed to three adolescent rhinos being raised on his farm in northern South Africa, funded by hunting antelopes.

"We put everything we earn back into conservation. Hunters pay us to save the rhino and repopulate Africa with native species."

Foreign hunters, about 60% of whom came from the US, spent $118.1-million on licences to hunt in South Africa in 2012, figures from the Pretoria-based Professional Hunters' Association of South Africa, show.

The hunting of endangered animal species, such as the black rhino, is subject to quotas.

There were also 63 white rhino, the most common rhino species, hunted at an average price of $84100.