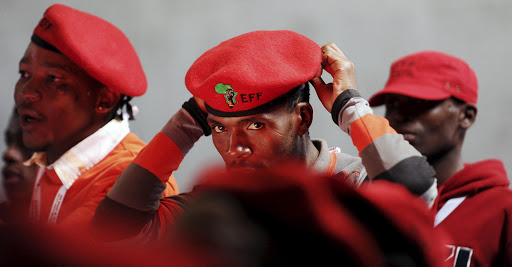 Police had to break up a scuffle between EFF MPs and ANC Youth League national task team member Braam Hanekom at Parliament on Thursday.

The scuffle broke out shortly after National Assembly Speaker Baleka Mbete adjourned the House following the Economic Freedom Fighters' refusal to leave after she ordered them out.

The EFF members stood their ground. Long after being ordered out they were still sitting in their benches chanting and singing.

Telecommunications and Postal Services Minister Siyabonga Cwele and his successor as state security minister David Mahlobo were in the Chamber and appeared to be negotiating with EFF leader Julius Malema and Chief Whip Floyd Shivambu.

The EFF eventually left the National Assembly and retreated to their office in the Marks Building.

There was a heavy police presence in Parliament. Mbete adjourned Parliament for the day shortly after 4pm, announcing that President Jacob Zuma would not complete presidential question time because of the protest by EFF MPs.

"South Africa knows that the president was here to perform his constitutional duty and was not given an opportunity to finish off and therefore we would like at this point to adjourn," she said.

The EFF members disrupted proceedings while Zuma was answering questions. Mbete instructed Malema and his fellow MPs to leave the House because they were "not serious" about proceedings.

Malema was not happy with Zuma's reply to a question about when he was going to repay part of the money spent on the R246 million security upgrades to his private Nkandla homestead in KwaZulu-Natal.

Public Protector Thuli Madonsela had recommended in her report on Nkandla, titled "Secure in Comfort", that Zuma repay part of the money.

"I will throw you out of the House if you don't listen," Mbete shouted at EFF members, who responded by chanting "pay back the money".

While Zuma and MPs from other political parties left the House, EFF members remained, still chanting "pay back the money", and insisting they would not move.