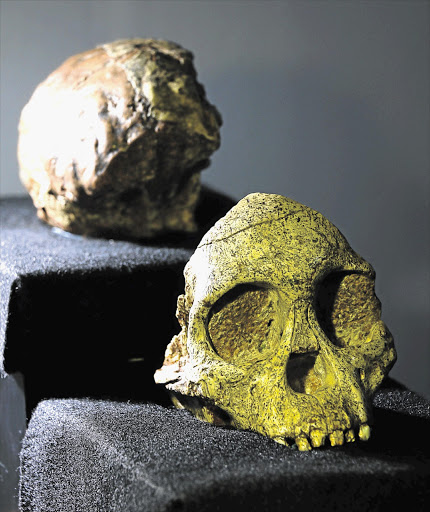 DIFFERENT UPBRINGING: The Taung Child fossil skull did not develop in the way typical of today's infants, whose heads have to expand to accommodate a relatively bigger brain
Image: WITS

The Taung Child was not like an ordinary toddler of today - it didn't experience a spurt in brain growth in its first few months, as modern babies do, making it less human-like than previously thought.

A CT scan of the famous fossil skull, kept at Wits University, Johannesburg, has revealed that the Australopithecus africanus child did not have the cranial adaptations found in modern human babies.

The high-resolution images of the Taung Child's cranium, a newly released research paper asserts, show that the hominid did not have metopic sutures or open anterior fontanelles, which allow a baby's head to emerge easily from the womb during birth.

The fontanelles facilitate brain growth in human infants. They close by the time the child is one.

The results of the research, published in the Proceedings of the National Academy of Sciences, disprove the theory that the 3-million-year-old child developed similarly to a Homo sapiens infant, in particular in the prefrontal region of the brain, the seat of several human traits.

"As they fuse, you will see evidence of this inside the bone; [on the skull of the Taung Child] there is no sign of fusion," said Dr Kristian Carlson, senior researcher at the Evolutionary Studies Institute at Wits.

The Taung Child was discovered in a limestone quarry in Taung, North West, 90 years ago.

It is the first time that such a high-resolution scan has been taken of the fossil, said Carlson, who is a co-author of the research paper.

Carlson believes that the cranial developments typical of today's infants developed millions of years after the time of the Taung Child, in our direct ancestors such as Homo erectus, as they began to develop bigger brains.

Although the latest discovery makes the Taung Child a little less human, Carlson said that the research adds to the understanding of human evolution.

It is encouraging, he said, to have new discoveries coming from a fossil that has been around for nine decades.

The fossil was instrumental in convincing scientists that man's earliest ancestors came from Africa.