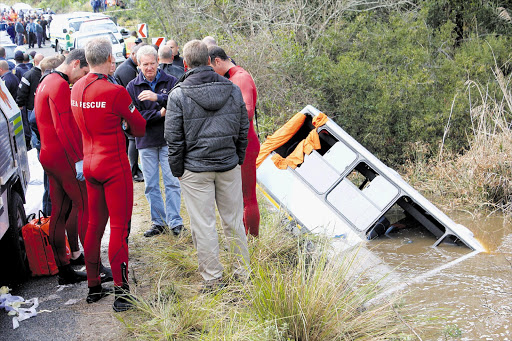 Rescuers survey the grim scene after 14 children and their driver died when an overloaded school bus crashed into a river in Rheenendal, just outside Knysna in 2011.

The Knysna Magistrate's Court found negligence had contributed to a horror bus crash which killed 14 Rheenendal children three years ago, according to a report.

He found there was evidence that the Western Cape education department, the testing station which issued a road worthy certificate for the bus, the driver and the bus company owner had been negligent, according to the report.

Torlage highlighted several issues with the bus, including an ineffective brake system, cracks in the chassis, play on the steering and problems with the gear lever and clutch.

In August 2011, 14 children were killed when the driver lost control of the bus on a low bridge and it plunged into a dam on the way to school. The bus driver was also killed.

The 32-seater bus was transporting 58 children. The remaining 44 children were injured in the accident.

According to the report, Torlage would pass on his recommendations to the director of public prosecutions for a decision on whether to prosecute.

Parents of the children could also proceed with civil claims.